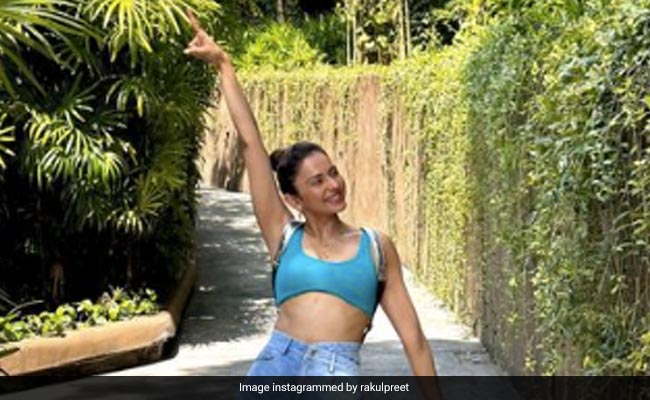 Rakul Preet Singh shared this image. (courtesy: rakulpreet)New Delhi: Rakul Preet Singh checked into Phuket, Thailand and she documented picture-perfect moments from her vacation on her Instagram profile on Friday. The actress shared a bunch of happy pictures of herself from the destination and she captioned it “Smiling towards 2023… Bring it on.” Rakul Preet added the hashtags #phuket, #blessed and #goodvibesonly to her post. Rakul Preet Singh flew to Phuket with boyfriend and film producer Jackky Bhagnani earlier this week. The couple were clicked at the Mumbai airport together earlier.See Rakul Preet Singh’s post here:The actress shared this on her Instagram story. “Beach day,” she captioned it.Screenshot of Rakul Preet Singh’s Instagram story.A few days ago, Rakul Preet Singh shared pictures from her Christmas weekend and they were all things fun. She wrote: “Christmas weekend was full of best energies. Blessed to spend it with all my favs and to the friends who did not make it to pics .. you know why.”Rakul Preet Singh was last seen in Thank God with Ajay Devgn and and Sidharth Malhotra. A few months ago she also starred in Doctor G, co-starring Ayushmann Khurrana. She also featured in Cuttputlli, co-starring Akshay Kumar earlier this year. Other than that she was also a part of Ajay Devgn’s Runway 34, in which she worked with Amitabh Bachchan and Ajay Devgn. She was also seen in Attack with John Abraham this year. She will next star in Chhatriwali, Meri Patni Ka Remake, among others.Rakul Preet Singh, a former model, made her Bollywood debut with Divya Khosla Kumar’s Yaariyan in 2014. She has starred in films like Aiyaari, De De Pyaar De, Marjaavaan, to name a few.Featured Video Of The DayAirport Traffic: Rakul Preet-Jackky Bhagnani, Sunny Leone And Mandira Bedi Spotted