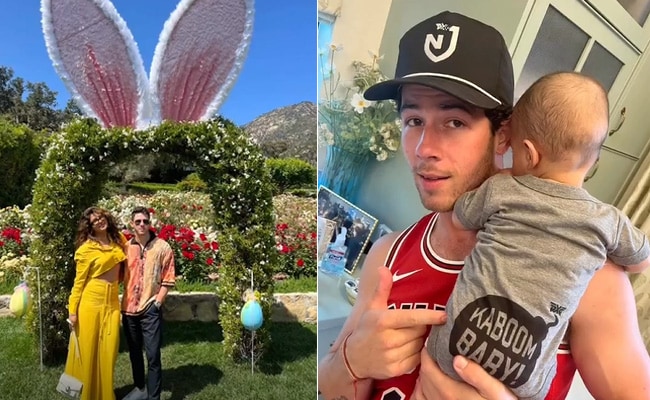 A still from the video. (courtesy: nickjonas)New Delhi: Before welcoming New Year 2023, Nick Jonas shared a video on his Instagram handle saying goodbye to the year 2022. The video features many pictures and videos of Priyanka Chopra and their daughter Malti Marie Chopra Jonas that never made it to Instagram. The video also features his parents Denise Joans and Paul Kevin Jonas Sr in matching pyjama sets. However, what grabbed fans’ attention was the background music. The video starts with Nick playing golf while a text on the top reads, “And with that 2022 season comes to an end. Goodnight.” Next, we see a picture of Malti Marie’s footprint and date of birth (January 15, 2022), followed by a picture of his daughter’s hand touching Priyanka’s chin. The video also includes pictures and videos from Holi and Diwali festivities, Priyanka’s 40th birthday celebration and moments from the Jonas Brothers concerts this year. Sharing the post he wrote, “What a year! Can’t wait to see what 2023 brings. Happy New Year to you all.” In the background, he added a remixed version of Raatan Lambiyan (from the movie Shershaah) and I Like Me Better.Fans were thrilled to hear the background music and soon after Nick Jonas shared the post, they flooded the comment section. A user wrote, “Love the Bollywood music in the background. Love him for embracing the Indian culture.” Another wrote, “Hindi Song (heart eyes emoticon) blessed new year.” “Omg the song,” wrote a fan.Here have a look at the post: Priyanka Chopra re-shared the post on her Instagram stories, and captioned it as “C (see) you soon 2023 and tagged her husband, Nick Jonas, with a heart emoticon. Check out the  post below: Priyanka Chopra had a great year as she welcomed her first child, a daughter Malti Marie in January via surrogacy. This year, on January 15, Malti Marie will be celebrating her first birthday.Featured Video Of The DayJanhvi Kapoor Never Skips Gym. Not Even On New Year’s Eve