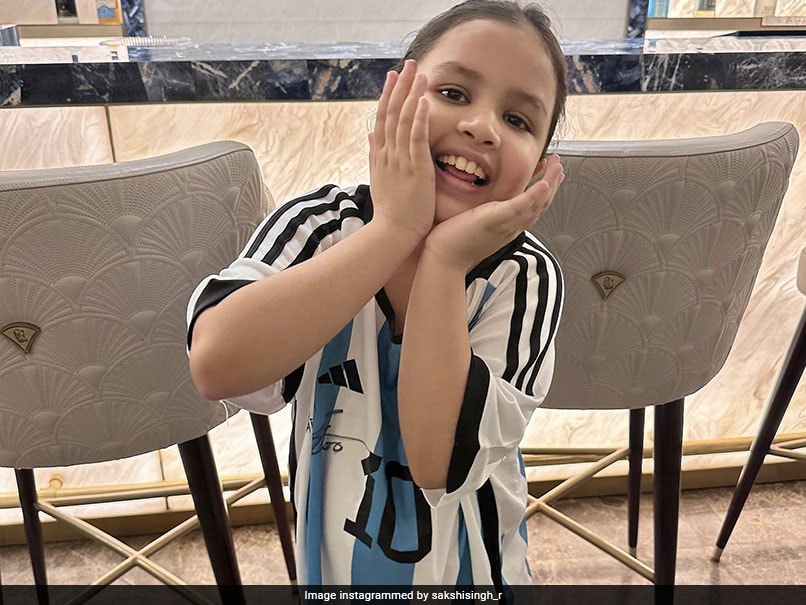 Ziva Dhoni wearing a Lionel Messi-signed Argentina jersey.© InstagramArgentina star Lionel Messi certainly lived his dream after helping his national team lift the FIFA World Cup 2022 trophy, an honour that came to the country after a long gap of 36 years. In the final match against France, Messi scored two goals before scoring one in the penalty shoot-out as Argentina defeated Kylian Mbappe’s team. After the game, Messi, his teammates and his millions of fans celebrated the World Cup victory with much jest.MS Dhoni’s daughter Ziva has shared her pictures in a Lionel Messi-autographed jersey. “Like father, like daughter!” was the caption in Ziva’s post.Dhoni’s wife Sakshi also shared one of the pictures on her Instagram.Before sharing Ziva’s pic, Sakshi had also shared a photo in which India wicketkeeper Rishabh Pant could be seen partying with the former India captain MS Dhoni in Dubai.”To many more EPIC nights!” Sakshi had captioned the post. Talking about MS Dhoni, he called time on his international cricket career on August 15, 2020. He is still a part of Indian Premier League as a player.On the other hand, Pant has not been picked for India home T20I and ODI series against Sri Lanka, starting on January 3. He has been the team’s key player in Test cricket, but failed to replicate the performance in white-ball formats.Featured Video Of The Day’Indians Should Have Higher Salaries In IPL Than Foreigners’: Ashok MalhotraTopics mentioned in this article