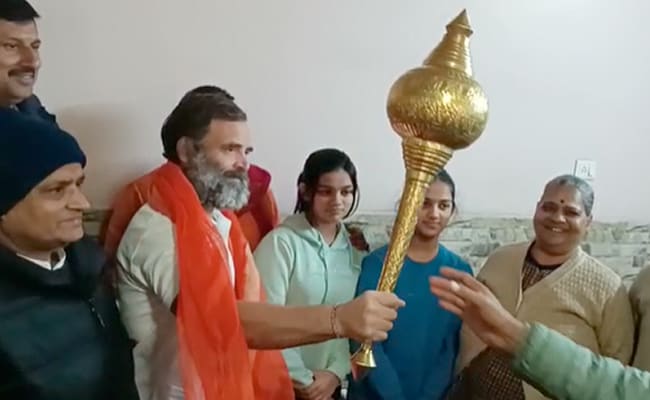 Bharat Jodo Yatra: Congress MP Rahul Gandhi at a temple of Lord Hanuman in Delhi’s Yamuna Bazaar.New Delhi: Congress leader Rahul Gandhi held a ceremonial ‘gada’ (mace) as he visited the Hanuman Mandir in Delhi’s Yamuna Bazaar area this morning, resuming the ‘Bharat Jodo Yatra’, which is headed to UP next, after a nine-day break.He spent around 15 minutes with the priest and others who clicked photos with him. The yatra is to cover some parts of Delhi — among them, areas affected by riots in 2020 — before it halts at Loni in UP’s Ghaziabad district on the state border this afternoon. It will cover mostly the farming belt in western UP before moving into Haryana, then Punjab, and eventually into Jammu and Kashmir. The Congress had invited the other Opposition leaders in BJP-ruled UP — Samajwadi Party’s Akhilesh Yadav and BSP’s Mayawati, most prominently — but both of them are unlikely to join. They have sent their best wishes to Mr Gandhi, though, as has the chief priest of the Ram Temple in Ayodhya.The Congress has struggled to revive itself in UP, the country’s most populous state, and been a junior partner in tie-ups with the regional parties without much mutual success over the past two decades — a period during which the region’s politics was defined increasingly by assertions of caste and religious identities.LIVE: #BharatJodoYatra | Kashmiri Gate to Pavi Sadakpur | Delhi to Uttar Pradesh https://t.co/eNsuwgQ9eR— Bharat Jodo (@bharatjodo) January 3, 2023Temple visits have been a much-discussed part of the yatra as the BJP alleges Rahul Gandhi is “doing this for political gain”. Mr Gandhi has sought to differentiate between his faith in Hinduism, “the religion of compassion and non-violence”, and Hindutva, the BJP’s ideology that he has described as an “affront to Hinduism”.The ‘Bharat Jodo’ or ‘Unite India’ march, which comes less than two years ahead of the 2024 Lok Sabha contest, is his pitch to be seen as a harbinger of “India’s true ideology of a syncretic culture”. Starting from Kanyakumari on September 7, the ‘Unite India March’ has so far covered over 3,000 kilometres, and is to conclude on January 30 in Kashmir with the hoisting of the national flag in Srinagar.