Watch: Man Tries To Pet A Caged Lion Inside A Zoo. What Happens Next 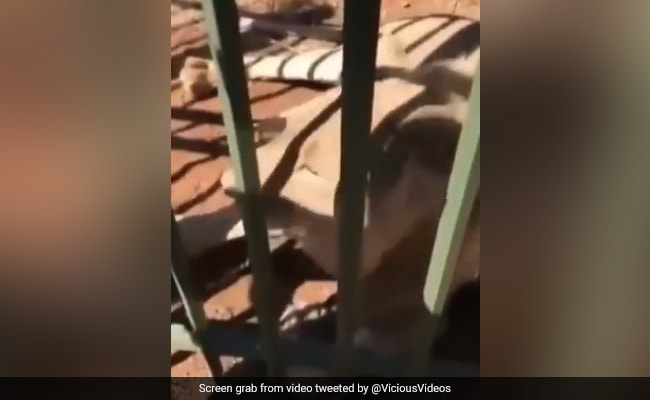 A lion reacted aggressively after a man tried to pet itA video has captured the shocking moment when a lion reacted aggressively after a man tried to pet it through a cage in a zoo. The video shared on Twitter shows a group of zoo visitors around a lion cage. One of them sticks his hand through the bars of the lion’s cage in an attempt to pet the wild animal. The lion, unperturbed by his actions, remains calm and does not react. Seeing him, the other visitor also tries to stroke another lion who is lodged in the same cage. When he pets the lion’s head, the beast lurches towards him and bites his hand, leaving him screaming in pain. Scared, the man immediately withdraws his hand from the cage and escapes the lion’s wrath. Meanwhile, the lion is heard roaring as panicked visitors move away from the cage.The 15-second clip was shared on a Twitter account called Vicious Videos. The location is not yet known.Have a look:Fook around…………. pic.twitter.com/N8ETVsXQJr— Vicious Videos (@ViciousVideos) December 26, 2022The video has gone viral, and many rebuked the man for disturbing the lion. Some even said that he deserved this punishment, while others noted how the lion’s reaction is a reminder for people to not venture too close to wild animals. Since being shared on December 26, the video has garnered more than 22,000 views, 521 likes, and several angry comments.One user sarcastically wrote, “Left hands are overrated. Might as well feed the lion this tasty five-finger snack!Him. Probably,” Another commented, ”That is not a housecat. Moron.”In another similar incident, a zookeeper in Jamaica had his finger ripped off by a lion after he poked his hand through the bars of its cage. Viral footage captured the horrifying moment wherein the man was seen desperately trying to pull his hand away, while the lion continued to hold on. Click for more trending newsFeatured Video Of The DayCongress’s Big Charge On Security Breach At ‘Bharat Jodo Yatra’