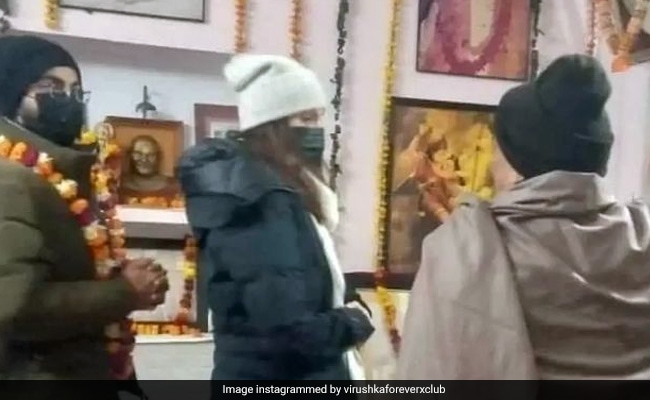 A picture shared by a fan page. (courtesy: viratkohli_no_18)New Delhi: Virat Kohli and Anushka Sharma took time out from their busy schedules and visited an ashram in Vrindavan, Mathura. The pictures of the couple from the ashram are going viral on the Internet. The photos are reportedly from Baba Neem Karoli’s ashram. In the viral images, Anushka and Virat can be seen meeting the people of the ashram – the actress can be seen in a black jacket and white cap, while the cricketer can be seen in an olive green jacket. They have covered their faces with masks. Seeing the images, it seems they distributed blankets to the people of the ashram. Here have a look: Anushka Sharma and Virat Kohli welcomed New Year in Dubai. Virat shared two adorable pictures of them enjoying a dinner date on New Year’s Eve. In the caption, he wrote, “(heart emoticon) 2023.” Here have a look: Earlier, Anushka shared many pictures from their night in Dubai a few days before New Year. In the first post, Anushka and Virat are twinning in black jackets as they happily pose for the camera. In the caption, she wrote, “This city, us, last night.” Later, the actress shared many pictures of herself posing in the car. In the caption, she wrote, “Last dump for the year! Photos by – Hubster @virat.kohli.” Here have a look at the posts: Meanwhile, on the work front, Anushka Sharma made a cameo appearance in Qala, starring Triptii Dimri and Babil Khan. This year, the actress will be seen in a sports drama Chakda Xpress, based on the while of cricketer Jhulan Goswami. The movie will stream on Netflix.Featured Video Of The DayAhan Shetty And Girlfriend Tania Shroff Pictured At Airport