“Ties With China Not Very Normal Because…”: Minister S Jaishankar 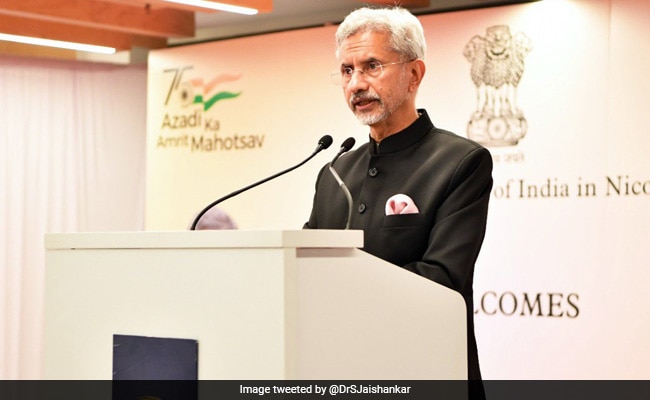 There will be no “compromise on the core issue” of national security, S Jaishankar said.Nicosia: India will not agree to any attempt to change the Line of Actual Control (LAC) unilaterally by China, External Affairs Minister S Jaishankar has said, as he underlined that New Delhi’s relations with Beijing are “not normal” and there would be no compromise on core issues.Addressing the Indian community in Cyprus on Friday during his first official visit to this Mediterranean country, Mr Jaishankar, in a veiled attack on Pakistan, also said that terrorism cannot be used as a tool to force India to the negotiating table.Mr Jaishankar said India has challenges on its borders, which intensified during the Covid period.”Today the state of our relations with China is not very normal because we will never agree to any attempt to change the Line of Actual Control unilaterally,” he said.There will be no “compromise on the core issue” of national security, Mr Jaishankar asserted.Indian and Chinese troops clashed along the Line of Actual Control (LAC) in the Tawang sector of Arunachal Pradesh on December 9 and the face-off resulted in “minor injuries to a few personnel from both sides”, according to the Indian Army.It is the first major clash between the Indian and Chinese armies since the fierce face-off in the Galwan Valley in June 2020 that marked the most serious military conflict between the two sides in decades.The ties between the two countries froze since then with India making it clear that peace and tranquillity at the border is the sine qua non for the overall development of bilateral ties.The two countries have held 17 rounds of talks so far to resolve the standoff.In his speech, Jaishankar said no country has suffered from terrorism as much as India.”We want good neighbourly relations with everybody. But good neighbourly relations doesn’t mean excusing or looking away or rationalising terrorism. That we are very clear,” he said without naming any country.”We will never normalise it. We will never allow terrorism to force us to the negotiating table,” he said.Relations between India and Pakistan have often been strained over the Kashmir issue and cross-border terrorism emanating from Pakistan.(Except for the headline, this story has not been edited by NDTV staff and is published from a syndicated feed.)Featured Video Of The DayBJP Jumpstarts Mission Election: Can Opposition Catch Up?