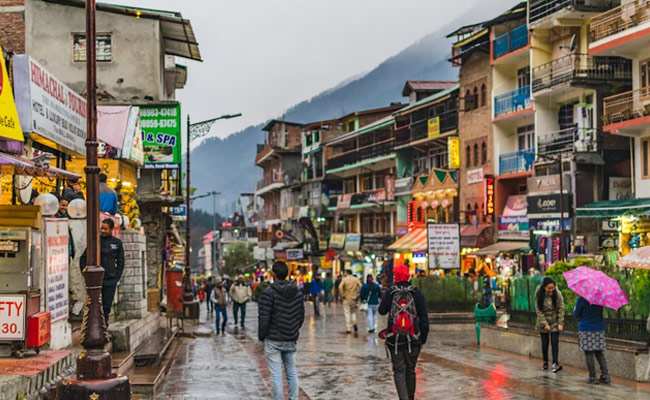 Shimla: The state capital was abuzz with activity as thousands of tourists made a beeline to Shimla to welcome the New Year but the occupancy in hotels was about 80 per cent, the lowest in the past four decades.Snowfall in Manali, craze to see Atal Tunnel, the new gateway to Lahaul and Spiti, has increased the footfall to the Kullu district that registered over 90 per cent occupancy, office bearers of the hotel industry said.Whereas no entry to tourist vehicles without a booking in Shimla city and apprehensions after last year’s bomb hoax at New Year has hit the footfall in Shimla, they said.Himachal Pradesh Chief Minister Sukhvinder Singh Sukhu had a stroll on the Mall Road on New Year’s eve on Saturday evening.He interacted with the local residents and the tourists and wished them a happy and prosperous year ahead.A large number of tourists were seen roaming on the Mall Road and the Ridge to celebrate New Year and police have been deployed in strength to ensure that no untoward incident takes place.The hoteliers claim that even in Covid years of 2020 and 2021, the restrictions were lifted by the year end and Shimla witnessed 95-100 per cent occupancy.The Himachal Pradesh Tourism Development Corporation (HPTDC) has organised events to mark Christmas and New Year in prime properties in Shimla, Manali, Chail, Dharamshala and other places and private hotels are also hosting events to welcome tourists on New Year.As New Year falls on a weekend this time, we were expecting a huge rush but so far the occupancy is about 80 per cent which is the lowest in the past 37-38 years, vice president of Shimla Hotel and Restaurant Association Prince Kukreja said.He said that snowfall at Manali and the craze for Atal Tunnel has turned tourists towards Manali. Besides this, the new Covid variant could also be a reason behind low footfall here, he said.There is a huge rush of vehicles on roads and traffic jams are a common sight but this rush has not converted into occupancy and it seems that illegal tourism units are having a field day, Kukreja said.However, president Tourism Industry Stakeholders Association M K Seth said that a large number of online bookings have been cancelled as the district administration decided not to allow tourist vehicles without hotel booking into the city and the occupancy in Shimla city is about 80 per cent, the lowest in the past four decades.The orders of the district administration to not allow tourist vehicles without hotel bookings in Shimla city resulted in low footfall of visitors as they planned to go to destinations with lesser restrictions and more convenience, he said.A huge chunk of tourists from the neighbouring states come without booking, Seth said.The district administration, in a release, had informed that tourists with confirmed hotel bookings would be allowed in the city while tourist vehicles without confirmed bookings would be parked at Tutikandi parking.Shuttle service (HRTC bus service) would be available to the city’s Old Bus Stand, Central Telegraph Office. Tourist buses and heavy vehicles would not be allowed in the city. In case of heavy rush vehicles would be diverted through Tutikandi-Malyana road, officials said.In case of heavy vehicular traffic, vehicles would be staggered from Shoghi. The idea is to provide safe and trouble-free stay for tourists and avoid traffic jams in the city, they added.An additional police force has been deployed and the city has been divided into six sectors, Deputy Commissioner Shimla Aditya Negi said, adding that the responsibility of overseeing each sector has been assigned to the magistrate and nodal police officers have also been deployed in each sector to ensure traffic management and maintain law and order.President Manali Hoteliers Association Mukesh Thakur said the occupancy is over 90 per cent here as Atal Tunnel (Rohtang) has increased the tourist footfall in the twin districts of Lahaul and Spiti and Kullu besides snowfall in Manali is a major attraction.Gondola at Solang, Igloo stays in Hamta, winter sports activities in and around Manali, skiing and snowboarding courses offered by Atal Bihari Vajpayee Institute of Mountaineering and Allied Sports Manali too are the major tourist attractions, he said.However, he said the huge rush of vehicles is not converted into room occupancy as a large number of people from outside the state have taken properties on lease and are running accommodations as tourism units without registration.These illegal properties are offering rooms at heavy discounts, Thakur added.As many as 1.39 crore tourists visited Himachal till November 30 this year compared to 56.37 lakhs last year, as per data procured from the tourism department which was hoping to touch the pre-Covid tourist inflow figures by the year end as December is the peak tourist season.The tourism and allied industry suffered immense losses during the Covid pandemic and tourist inflow dropped by 81 per cent in 2020 compared to 2019. The tourist arrival in Himachal Pradesh was 1.72 crore in 2019, which crashed to 32.13 lahks in 2020 and marginally recovered to 56.37 lahks in 2021.With a surge in Covid cases around the globe, the state health had issued an advisory to observe Covid appropriate behaviour to keep a check on the increase in Covid cases in the near future.Chief Minister Sukhvinder Singh Sukhu has directed tourism and other departments to follow the slogan of ‘Atithi Devo Bhava’, facilitate the tourists and make adequate arrangements and proper traffic plans in all districts for the smooth flow of traffic.He has also allowed eateries at tourist places to be opened round the clock.(Except for the headline, this story has not been edited by NDTV staff and is published from a syndicated feed.)Featured Video Of The DayBJP Jumpstarts Mission Election: Can Opposition Catch Up?