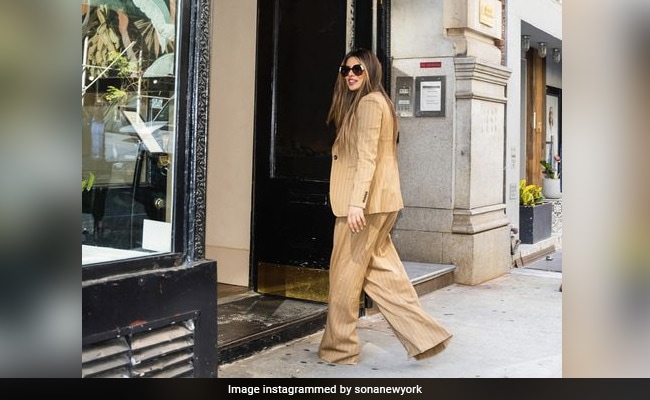 Priyanka Chopra at Sona New York. (courtesy: sonanewyork)New Delhi: Priyanka Chopra managed to scoop some time out of her busy schedule and visited her restaurant Sona New York. A picture of the actress at Sona New York was shared on the official Instagram handle of the restaurant. Priyanka Chopra, dressed in a beige pantsuit, can be seen at the entrance of the restaurant. She can be seen smiling for the camera. “Walking into Golden Hour at SONA like,” read the caption on the post. Priyanka Chopra launched the restaurant in 2021.See the photo here:In September, Priyanka Chopra visited her restaurant with husband Nick Jonas, and a couple of friends, including her manager Anjula Acharia, And Just Like That star Sarita Choudhury, Nobel Prize laureate Malala Yousafzai to name a few. “A NYC night out with some of my favorites,” she captioned the post.Here’s another post from Priyanka Chopra’s Sona diaries.Priyanka Chopra, who was last seen in Matrix 4, will next be seen in Russo Brothers’ Citadel. Her next Hollywood project is Love Again, a musical, in which she will co-star with Sam Heughan and Celine Dion. The film was previously titled It’s All Coming Back to Me. She will also be a part of Farhan Akhtar’s Jee Le Zaraa with Alia Bhatt and Katrina Kaif.Priyanka Chopra, a former Miss World and a Bollywood star, is a woman of many hats. She is the first South Asian woman to headline the cast of an American television show and has featured in many Hollywood projects. Priyanka Chopra is a tech-investor and also counts as a UNICEF Goodwill Ambassador. She launched a haircare brand as well.Featured Video Of The DaySaiee Manjrekar’s Airport Diaries