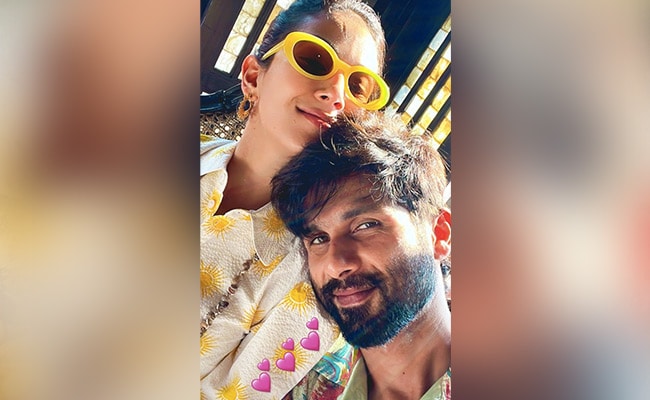 Shahid Kapoor shared this picture. (courtesy: shahidkapoor)When Shahid Kapoor shares a picture, you cannot help but stop and stare. The actor’s latest Instagram upload is no different. The photo features Shahid and his wife Mira Rajput. The two are sharing an adorable moment here. Mira looks classy, as usual, in an uber-chic shirt. Don’t miss those shades. Meanwhile, Shahid, who is resting his head on Mira’s shoulder, keeps it simple in a printed shirt. Caption? Just a bunch of pink heart emojis. Oh, and that smile does the rest. Before this, Shahid Kapoor set the Internet on fire with his poolside pic. In the caption, Shahid kept it simple and just said, “Sharing my profile.” Fans could not help but gush about the photo and dropped heart emojis in the comments section. Replying to the post, one fan said, “My 2023 is already made,” echoing the emotions of most of Shahid’s followers.Shahid Kapoor began his week with a photo of his breakfast. The actor enjoyed some bread with bananas and chocolate spread. In the note, he said, “Good morning!” On New Year too, Shahid Kapoor shared a selfie from the swimming pool. In the caption, he wrote, “Keep it real and make it count. Happy new year everyone. Be worthy and thankful. Have an amazing year,” with heart and sparkle emojis.Ahead of 2023, Shahid Kapoor also shared a montage video looking back at the year that was. In his note to fans, Shahid said, “Objects in the mirror were just as much fun as they appear… Can’t wait to cruise through 2023.”Before this, Shahid Kapoor featured in Mira Rajput’s Christmas post. Along with the selfie of the couple, she said, “Merry Christmas from me and my Santa for life. And our two elves who are too busy with presents and pyjamas.”Shahid Kapoor also shared a photo from one of his last flights of 2022 and said, “Blurry evenings…orange skies … back to the bay!”Mira Rajput and Shahid Kapoor got married in 2015. They are blessed with two kids Misha and Zain. Featured Video Of The DayRanbir Kapoor-Alia Bhatt, Ranveer Singh And Others At Anant Ambani’s Engagement Party