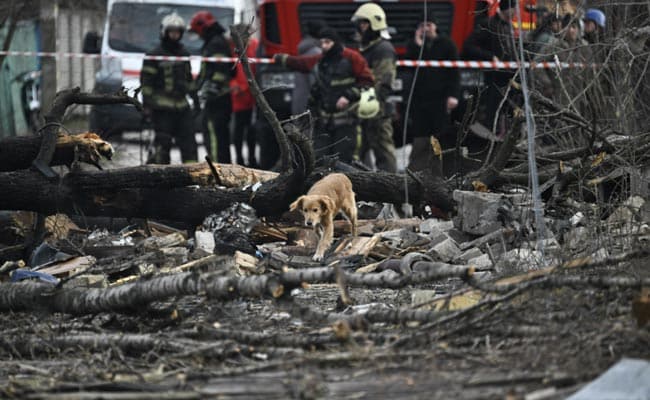 The near constant Russian strikes have left many in Kyiv without power.Kyiv, Ukraine: Georgiy Yatsenko was hiding in the basement trying to comfort his anxious grandchildren on Thursday morning when an explosion rocked his normally sleepy street in southern Kyiv.The blast blew out all his windows but the scene that greeted him when he stepped outside was even more frightening — half a dozen houses almost completely destroyed by Russia’s latest missile barrage targeting Ukraine.”The main thing is that people are alive,” he said as he watched excavators try to clear the resulting mess of bricks, wooden planks and power lines.Ukrainian officials said air defence systems downed all 16 missiles that targeted Kyiv on Thursday — part of a broader assault that also hit the second city Kharkiv in the east and the western city of Lviv on the border with Poland.Multiple witnesses said the explosion on Yatsenko’s street in Kyiv’s southern Bortnychi neighbourhood was probably caused by a missile fragment, not a direct hit.It made little difference to Tetiana Denysenko, who rushed to the scene after receiving a distressing call from her young granddaughter.”She said, ‘Grandma, our house is on fire. We’ve been hit. My mother (Denysenko’s daughter) was thrown to the ground. She’s lying unconscious,'” the 62-year-old recalled.”That’s all I could hear.”By the time Denysenko arrived, her daughter was being hauled off in an ambulance for emergency surgery.”Thank God the children are alive,” Denysenko said through tears. “Thank God my granddaughter only had an injured leg.”- ‘We heard a bang’ -Sergiy, who lives in the same neighbourhood and gave only his first name, said that despite an air raid siren early on Thursday morning, he had spent a leisurely few hours having breakfast and walking his dog.Once he heard reports of explosions elsewhere in Kyiv he decided to go to a local shelter for cover, but he and his wife had only reached their front door when the explosion occurred at around 9:00 am.”We heard a bang, very strong, and there was a second explosion, but less powerful,” the 59-year-old said.”We went outdoors and saw the windows in our house were broken and the house opposite ours was destroyed.”He and his neighbours must now race to repair their houses as they prepare for the depths of winter amid persistent blackouts.Close to half of Kyiv’s population was left without power after the attacks on Thursday, as was 90 percent of Lviv, officials said.Yatsenko said he planned to cover his window frames with plastic in an attempt to warm the house where he lives with nine other relatives.It was unclear what the options would be for those whose houses suffered heavier damage.At Denysenko’s daughter’s house, neighbours helped cart out salvageable items including a fridge but the elderly woman had no answer when asked where the family would go.”I don’t know,” Denysenko said, sobbing. “I don’t know.”(Except for the headline, this story has not been edited by NDTV staff and is published from a syndicated feed.)Featured Video Of The Day’Killer’ Syrup 2.0: Uzbekistan Reports Cough Syrup Deaths After Gambia