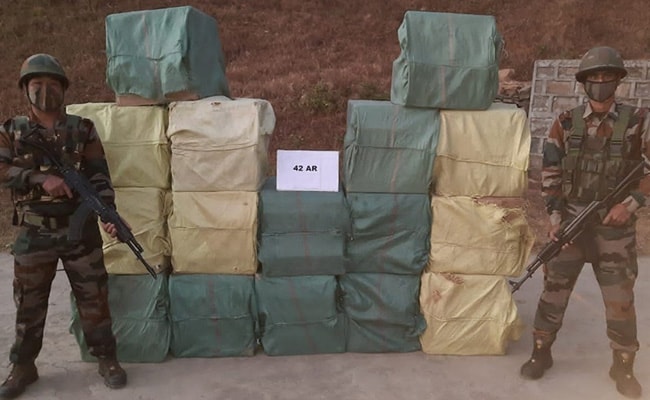 The seized substances included methamphetamine tablets, heroin and foreign cigarettes.Guwahati: Huge quantities of drugs and banned substances valued at Rs 7.39 crores have been seized during raids at different places in Mizoram. The seized substances — methamphetamine tablets, heroin, and foreign cigarettes — were smuggled from Myanmar, officials said, adding seven people have been arrested during the raids.At least 20,000 highly addictive Methamphetamine tablets worth Rs 6.66 crore were seized during a raid at Tuikhurhlu in Aizawl district. The drugs were seized when the smugglers were carrying the smuggled items in a vehicle, officials said. Four smugglers were arrested during the raid, they added.   In another operation, Assam Rifles seized foreign cigarettes worth Rs 41.60 lakh at Zokhawthar village along Myanmar border in Champhai district.Heroin valued at 31.05 lakh was also seized in an operation on the Champhai-Aizawl road in the Champhai district during which three smugglers were arrested.Large quantities of Methamphetamine tablets and various other drugs are being smuggled into Mizoram through the porous border with Myanmar.Mizoram’s 510 km unfenced international border with Myanmar is a major hotspot of drugs smuggling from the neighbouring country.Featured Video Of The DayWatch: New Zealand, Australia Welcome 2023 With Fireworks, Light Show