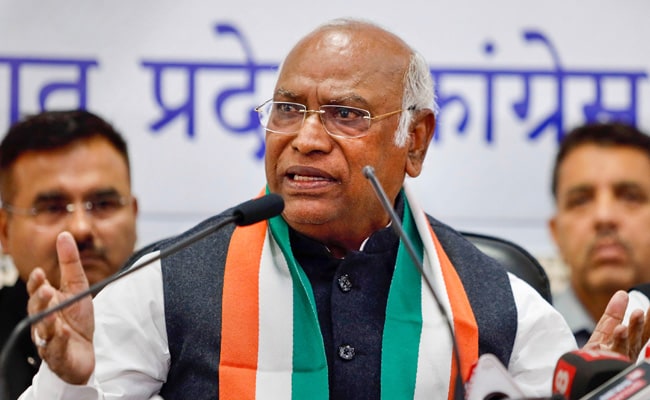 The democracy is in danger due to BJP and RSS, said Congress President Mallikarjun Kharge.Mumbai: Congress President Mallikarjun Kharge on Wednesday said that due to the RSS and BJP, Democracy in the country is in danger.The Indian National Congress (INC), India’s largest opposition party, marked its 138th foundation day on December 28. Congress President Mallikarjun Kharge attend a Huge rally in Somaiya Ground, Mumbai. INC leaders like Kanhaiya Kumar, Nana Patole, KC Venugopal Ashok Chavan & Imran Pratapgarhi were also present at the occasion.Mr Kharge while addressing the gathering said, “I want to aware youths, women, Dalits, Bhramans community that we should come together and make our Constitution and democracy safe. BJP and RSS destroying the Constitution, they are separating people on the bases of caste and religion. We want your support, if you won’t support us then our democracy is in danger.”Mr Kharge added, “Prime Minister Narendra Modi decided to give free rice now they extend it till December 2023 then to May till Election’s after that they stop it and say we gave free rations for a long time now you pay for it”.Mr Kharge slammed BJP and said, “The Party has a huge washing machine that can clean even the biggest stains. When people are put into this machine they come out clean. We all have to fight together to save democracy. It is a govt of liars at the Centre.”Bharat Jodo Yatra is an attempt to fight against the atmosphere of hate being created by them (BJP) in the country. A notice was sent to Rahul Gandhi telling him that such events shouldn’t be held due to Covid19 but the Prime Minister is attending many public events.(Except for the headline, this story has not been edited by NDTV staff and is published from a syndicated feed.)Featured Video Of The DayFormer Maharashtra Home Minister Anil Deshmukh Out On Bail

Everything You Ever Wanted to Know About Artificial Intelligence