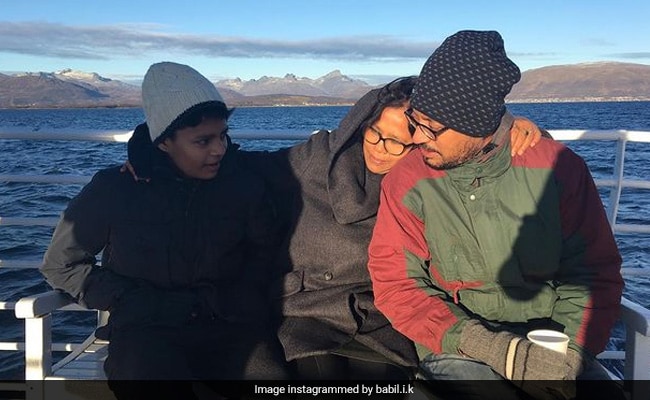 Babil Khan shared this picture. (courtesy: babil.i.k)New Delhi: Irrfan Khan’s son Babil, who made his debut in Bollywood with the movie Qala, has dropped his first post of 2023, and it’s about his father. He has shared an adorable throwback picture on his Instagram handle, featuring his parents, Irrfan Khan and Sutapa Sikdar, with his younger brother Ayaan. Along with a photo, he shared a sweet note remembering the actor. This post has come three days ahead late veteran actor’s birth anniversary. Babil wrote, “2023: Happy new year to aap sabh (to you all). It’s baba’s birthday in 3 days. Let us refine ourselves. Let us stop, reflect and recognise ourselves. Let us understand the voids that built these walls between you and I, allow me to love you and let us unify ourselves.” Babil Khan concluded his note with these words, “Let us come together this year. Let’s be one big family.” Soon after he shared the post, Mithun Chakraborty’s son Namashi commented, “Baba must be so proud of u @babil.i.k for your smashing debut and immense hardwork,” followed by a heart emoticon. Here have a look: Irrfan Khan’s birth anniversary is on January 7. He died in April 2020 after battling a neuroendocrine tumour for two years.Coming back to Babil Khan, he made his debut alongside Triptii Dimri in Qala. The actor received immense praise from the audience and critics for his performance in the movie. During the promotion of the film, he revealed that while shooting the film, there was pressure, and it used to “affect and scare” him. There is a lot of pressure. Two years ago, when we were shooting, at that time also the pressure was there. It would affect me, it would scare me, but now it motivates me to do better work. The definition of pressure has changed now,” as per the news agency PTI.Featured Video Of The DayInside Arjun Kapoor And Tabu’s Kuttey Promotions

PNB Chief Says Bank Has Exposure To Adani Group, But Not A Matter Of Worry