Asked If He Can Perform The Phool Aur Kaante Split Stunt Again, Ajay Devgn Said This 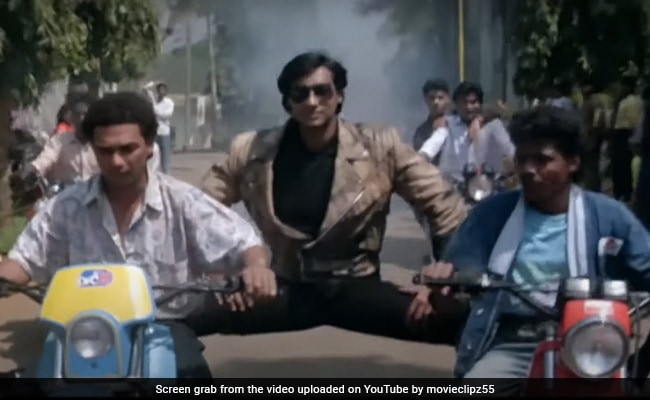 Ajay Devgn in a still from Phool Aur Kaante. (courtesy: YouTube)New Delhi: Are you a big fan of Ajay Devgn’s split stunt in his 1991 film Phool Aur Kaante? If yes, then his latest post will definitely make your day. The actor, on Wednesday, teased his fans about a possible sequel to his debut film, which was directed by Sandesh Kohli. Ajay shared a video from a conversation, where he is saying that he would love someone to work on a Phool Aur Kaante remake. “Which is a remake-able film aapke hisab se (according to you)?” the actor is asked in the clip. He replies, “I would like somebody to remake Phool Aur Kaante.” Then, a person in the background can be heard saying, “Yeah, must be difficult to do that, pehle toh camera bhi alag hote the (even the cameras were different earlier).” The lens then again focuses on Ajay Devgn and he is questioned, “Now that you have mentioned Phool Aur Kaante, mujhe sacchi batao wo split jo aapne kiya tha, aaj bhi kar loge (tell me honestly, split that you did back then, will you be able to do it again)?” His answer is, “I would need a little practice, mahina dedh-mahina (a month or two).”The person sitting beside Ajay Devgn asks surprisingly, “Really?!” and he replies, “I think so, koshish karni padegi  (I will have to practice).” Now that’s what we call a hint for a new film. Even in the caption, Ajay Devgn sort of teased his fans about a Phool Aur Kaante remake. “Phool Aur Kaante Returns has a good ring to it. What do y’all think?” the actor asked his Instafam and sent them into a tizzy.Excited to see Ajay Devgn’s post. Check it out here:The iconic stunt from the 1991 hit served as the first step in Ajay Devgn’s journey to stardom. Since then, he has recreated the stunt a couple of times onscreen – in the Golmaal series, Son Of Sardaar and De De Pyaar De. He also nailed the stunt for a commercial last year.Ajay Devgn was last seen in Drishyam 2. He has Bholaa, Maidaan and Golmaal 5 lined up.Featured Video Of The DayAirport Spotting: Ananya Panday, Manoj Bajpayee, Parineeti Chopra Fly Out Of Mumbai