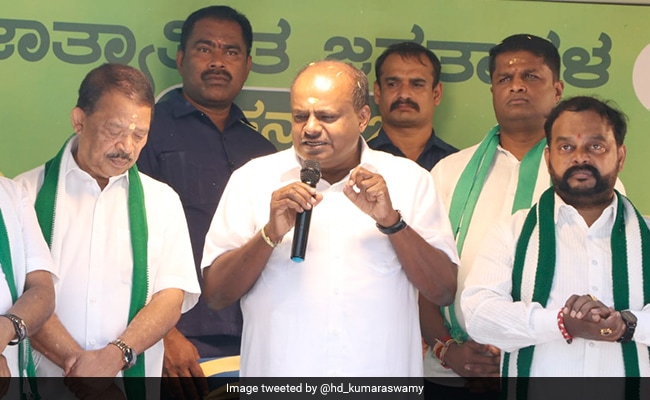 HD Kumaraswamy also questioned Amit Shah’s son Jay Shah’s eligibility to become BCCI secretary. (File)Mysuru: Former Karnataka Chief Minister HD Kumaraswamy on Monday hit back at Union Home Minister Amit Shah and said that the “beginning of the end” of the BJP has begun in the state. His remarks came after Mr Shah made a remark about the former chief minister and his family.”Karnataka would become the ATM of a family if JD(S) was voted to power,” Mr Shah had said on Monday.Mr Kumaraswamy also questioned Mr Shah’s son Jay Shah’s eligibility to become the Secretary of Board of Control for Cricket in India (BCCI).”Amit Shah’s games don’t work in front of me. Amit Shah is not even equal to HD Devegowda’s toenails,” the former Chief Minister told reporters.He added, “During Mandya visit, he (Amit Shah) made several allegations against us, which are filthy.”The former Chief Minister was irked with Mr Shah’s statement that if JDS wins, it will become the family’s ATM. “I replied to the Home Minister’s statement. But he did not answer the questions I asked.”He challenged Mr Shah to prove to the people of the state that the nation’s wealth has not been misused as an ATM in any case.”Entire Karnataka is ATM for BJP. Percentage business is going on everywhere. 40 per cent of business is known to the whole world. Amit Shah doesn’t know this?” the former Chief Minister sneered.Talking about Jay Shah, he questioned, “He is on the Indian Cricket Board. What was his contribution to cricket?”He insisted that Mr Shah should tell the country what merits his son holds to become BCCI Secretary.Karnataka Legislative Assembly elections are scheduled to take place this year.(Except for the headline, this story has not been edited by NDTV staff and is published from a syndicated feed.)Featured Video Of The DayDemonetisation Was Valid, Says Supreme Court, 1 Judge Disagrees