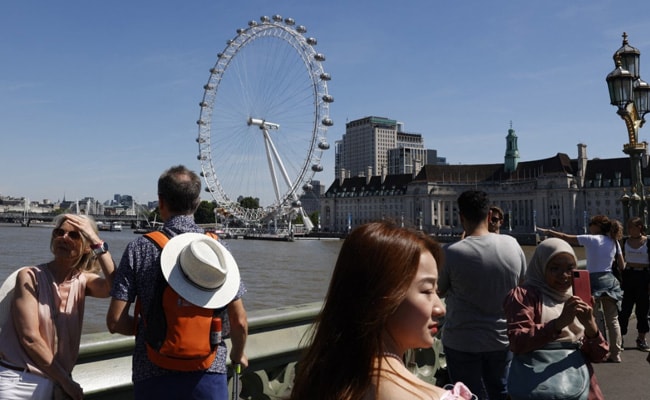 The United Kingdom experienced several intense heatwaves this year. (File)London: British experts on Wednesday said 2022 was set to be the UK’s warmest on record after a year of several heatwaves alongside minimal rainfall.This year had the “highest annual average temperature across the UK, exceeding the previous record set in 2014 when the average was 9.88 degrees Celsius (49.78 degrees Fahrenheit)”, the Met Office, the UK’s meteorological authority, said in a statement.The figure for 2022 would be announced later.Since 1884, each of the 10 years recording the highest annual temperature have occurred from 2002, according to the forecasting body.”2022 is going to be the warmest year on record for the UK. While many will remember the summer’s extreme heat, what has been noteworthy this year has been the relatively consistent heat through the year,” said Mark McCarthy, head of the Met Office’s National Climate Information Centre.Every month except December had been warmer than average, he said.”The warm year is in line with the genuine impacts we expect as a result of human-induced climate change.”Although it doesn’t mean every year will be the warmest on record, climate change continues to increase the chances of increasingly warm years over the coming decades,” he added.Most of England and Wales experienced drought this summer after exceptionally high temperatures and heatwaves as well as little rainfall.Similar conditions were seen across northwest Europe.- Records smashed -In July, England also smashed its all-time temperature record when the mercury topped 40 degrees Celsius for the first time ever, while July was the driest on record across the south.The parched conditions notably saw the source of the River Thames drying up and shifting several miles downstream.Satellite imagery showed the nation’s traditionally green and lush countryside turning to various shades of yellow and brown, as huge swathes of southern, central and eastern England dried out.The Met Office said all four of the seasons in 2022 were in the top 10 warmest on record.Winter was the eighth hottest, spring the fifth, summer the fourth and autumn the third.McCarthy said temperatures had been above the 1991-2020 long term average for a large proportion of the year, adding that this “is something that we can anticipate as we become increasingly affected by climate change”.”Met Office science has shown that the temperatures witnessed in mid-July would have been extremely unlikely in the pre-industrial period – the era before humanity started emitting lots of greenhouse gases from burning fossil fuels,” he said.”Our climate is still subject to notable cold spells during the winter season, but our observational data show these have generally become less frequent and less severe as our climate warms,” he added.(Except for the headline, this story has not been edited by NDTV staff and is published from a syndicated feed.)Featured Video Of The DayVideo: Salman Khan Kisses Ex Sangeeta Bijlani On Forehead At His Birthday Bash