Food and folklore go hand in hand. From telling children that the crusts on bread will make their hair curly to the idea that carrots help you see in the dark, there are myths and tales about almost everything we eat. Some of the stories are harmless fun, but there are older and stranger bits of folklore surrounding some of our favorite—or not-so-favorite—foods.

The international view of British food is not always complimentary, to put it mildly, but the lore of the United Kingdom’s dishes is as rich as any in the world.

Related: 10 Foods That Can Cause Bad Dreams

If you’re anything like me, you love to get free food. Folklore, however, gives a stern warning—never accept from the fairy folk! Except that it also warns about the dangers of not taking food when offered by fairies. Folklore is not an exact science.

If you accept fairy food, there is the danger that you will be trapped in the realm of the fairies and unable to escape. In the story “Childe Rowland,” the wizard Merlin warns someone venturing into fairy-land that they should “bite no bit, and drink no drop, however hungry or thirsty you be; drink a drop, or bite a bit while in Elfland you be and never will you see Middle Earth again.”

If you encounter fairy food in the real world, though, it is wise to accept it. In a tale from the isle of Arran, two farmers jokingly wished for the fairies to lay out a feast for them. When the meal magically appeared, they were too scared to eat it. For refusing the offered meal, the field went barren, and nothing ever grew again.[1] 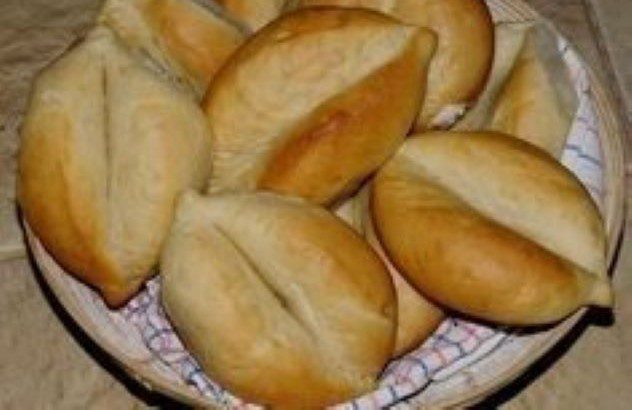 Bread has always been a staple food for most people. Getting the ingredients, mixing them, kneading the dough, and baking it took a great deal of time. Every stage was filled with the chance for folklore to creep in. If a hole formed in the middle of your loaf, it was called a “coffin” and predicted a coming death. If the yeast failed to rise, then you had been cursed by a witch—but they could be kept off by marking the bread with a cross on top.

One form of bread was made in a very peculiar way. Cockle bread was used by young ladies as a way to win a lover. While they made the bread, they would chant the following rhyme:

My granny is sick, and now is dead,
And we’ll go mold some cockle bread.
Up with my heels and down with my head,
And this is the way to mold cockle bread.

In order to ensure their love went into the bread, the dough was kneaded with the girl’s buttocks. A morsel of this bread fed to the desired boy would ensure he fell in love with her.[2]

Hot cross buns are one of the most delicious aspects of a British Easter. The buns are stuffed with dried fruits and spices and marked with a cross on the top. It is the presence of that cross that has inspired much of the folklore surrounding them.

According to tradition, a hot cross bun will never go moldy. There are many examples of ancient hot cross buns which suggest they do last a long time. In several London pubs, hot cross buns are hung up every year and still look remarkably good. Their sanctity preserves the buns from rotting, it is said (though it may be the spices as well), and also gives them magical properties.

In former years, preserved hot cross buns were grated into food and drink as a cure for all manner of ailments. They were also hung in houses to prevent fires. When hung in barns, the buns stop evil spirits from attacking the livestock. Sailors wanting to ensure their ship did not sink would always have a hot cross bun on board.[7]

Wedding cakes are the most important cakes in many people’s lives. The act of cutting the cake together signals the first joint act of a couple’s lives together. Many couples would keep one of the tiers of their wedding cake to serve at the christening of their first child to bring it luck. But there are other magical uses of a wedding cake.

If you can resist eating your slice of cake, then you can use it to predict who your own spouse will be. Take your bit of cake and place it under your pillow before you go to sleep—watch out for crumbs; that’s how you get ants. When you sleep that night, an apparition of your eventual partner will appear in your dreams. Some say that you do not need a full slice of cake. All you need is a piece of the cake that has been passed through the new bride’s wedding ring.

There is also a tradition that a girl should put a piece of wedding cake in her pocket for the duration of the newlyweds’ honeymoon. If she does, then she will be married before the year is out.[4]

Perhaps the most popular method of divining who your lover will be is to bake a dumb cake. There were a number of variations of the ritual, but all involved the makers of a cake working in absolute silence, hence the name dumb.

In one version, three girls come together, and all place a handful of flour and salt into a pile. With a little water, they work it into a dough and mark the cake with their initials before baking it. Once it was ready, the girls wait until midnight. At the stroke of 12, a ghost will enter and point to the initials of the girl who will marry next.

One tradition involves only two girls working in silence, and they chant:

That night the cake is placed under the pillow, and a vision of their future spouse will come to them. Most dumb cakes were not intended to be eaten. Probably wisely, as some recipes call for them to contain bits of fingernail, hair, dust, and usually an unhealthy amount of salt.[5]

There is something magical about growing vegetables. You plant a few seeds and watch them seemingly grow from nothing into something that you can harvest and eat. But some people put their crops to use in actual magic.

Small potatoes were sometimes worn on a string around the neck to protect people from rheumatism. Even today, you can find examples of people putting bits of potato on people with fevers and claiming that they draw out fever, turning black in the process. In fact, this is just the oxidation of starch, but some prefer the folklore explanation.

Onions have been put to similar use. For example, when smallpox broke out in Sheffield in 1927, many houses hung up onions in their home. It was believed that onions absorbed the pestilence. Some even used onions to ward off plagues in their cattle.

If you have an earache, you might consider warming an onion in the fire until it is soft and taking out the heart in the middle. This, inserted into the ear, was thought to cure the pain. Probably best not to try this at home.[6]

One of the most commonly acted out superstitions is performed at dinner tables across the country. If you happen to spill the salt, you must take a pinch of it and cast it over your left shoulder, or disaster is sure to follow. This is supposed to be because when you spill salt, the Devil takes it as an invitation to join the meal. Throwing it over the shoulder hits him in the eye and keeps him at bay.

Salt could also be used to drive off witches. In some places, a pinch of salt was thrown in the fire, and the following charm was spoken: “Salt! Salt! I put thee in the fire. May the one who has bewitched me neither eat, drink, nor sleep until the spell is broken.”

Salt was also useful to the dead. When graves are dug up, plates are sometimes found on the skeleton. These plates were filled with salt and left with the body because they were thought to keep the soul safe from the Devil as “the devil loveth no salt with his meat.” Which sits at odds with the tradition of spilling salt. Folklore is allowed to contradict itself, it seems.[7]

Big and elaborate wedding cakes have not always been the center of a wedding feast. In Scotland in the past, the most important element of the day was the Infar-cake. This was a decorated piece of shortbread that had a number of folkloric uses.

The wedding shortbread was traditionally baked by the mother of the bride. On the day of the wedding, it would be held over the heads of the new couple and broken. As the pieces fell around them, the number of fragments was examined. The more bits it shattered into, the more children the couple were destined to have. Sometimes the pieces of shortbread were tossed over the heads of the bride and groom before they entered their new home. Though it does seem to be a bit of a waste of shortbread.

The bits that were left on the floor could still be used, however. Guests would scramble to gather some up, especially those who were unmarried. These were then carried home and placed under the pillow (again) in hopes that they would provoke a dream—a dream of future love.[8]

Turnips are not the most lovely of vegetables. This perhaps explains why they were once carved into punkies—lanterns that children carried around as they went begging from door to door. The results could be incredibly spooky and much more uncanny than the more familiar pumpkin.

If your child had whooping cough, then there was one way for turnips to be a cure. Take a turnip and slice it into half-inch strips. These were then layered with brown sugar between them. The thick liquid that oozes out was then fed to the sick child.

In Wales, a turnip could be used to predict who a girl would fall in love with (this seems to be a theme). The girl had to sneak out at night and steal a turnip from a neighbor’s field. This turnip then had to be peeled in a single piece. The peeling was then taken into the garden and buried. The turnip itself had to be hung behind the bedroom door and was supposed to give the girl a dream of her husband.[9]

If there is one character that is sure to provide a good bit of folklore, it is the Devil. In folk tales, he is always up to some mischief or other. But given his back story, you can maybe forgive him for some of his naughty ways.

Michaelmas, the 29th of September but the 11th of October in the old calendar, is a celebration of the archangel Michael. It also traditionally marks the day when Michael cast the Devil out of heaven. According to British folklore, the Devil not only had a long fall, but he also had a very painful landing in a blackberry patch, getting torn by its thorns. This gave Lucifer a lasting hatred of blackberries.

Folklore says that blackberries must never be picked after Michaelmas because on this day, the Devil takes his revenge on the berries. In some tellings of the story, the Devil touches the berries then and poisons them, but in others, he does something more extreme. Whether he spits on them, urinates, or defecates depends on who is telling the tale. Still, probably best not to risk it.[10]

Rupee Nearly Flat At 81.25 Even As Dollar Languishes Near A 16-Week Low

Top Indian Drone Companies To Watch Out For In 2023

Rupee Nearly Flat At 81.25 Even As Dollar Languishes Near A 16-Week Low