When In Paris, Do As Kartik Aaryan Does. Pics From Actor’s France Diaries 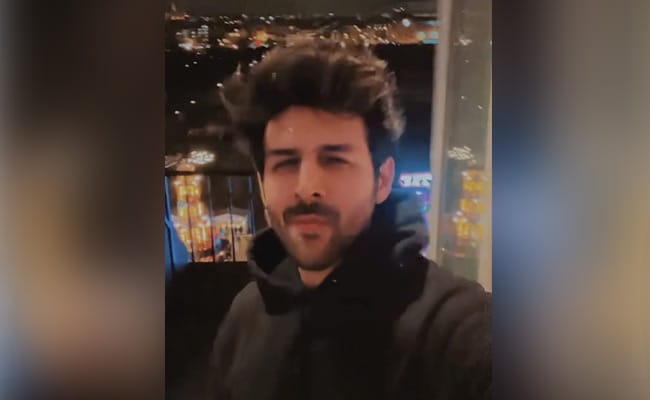 A still from the video. (courtesy: kartikaaryan)Another day, another update from Kartik Aaryan’s Paris diaries. Right from his gastronomic adventures to sun-kissed pictures of himself, the actor is clearly having a blast. So now, what’s the latest update? Kartik has shared a video that features the main attraction of the city. Any guesses? Right. It’s the Eiffel Tower. The clip opens with Kartik recording himself with the front camera amid windy conditions. Moments later, the actor flips the camera mood and voila. We can see the Eiffel Tower with golden lights. We also get a landscape view of the nightlife in Paris. He wrote, “When in Paris,”in the caption.      Now, take a look at some other postcards from his Paris diaries. Kartik Aaryan shared a picture of himself from Paris’ Trocadero Metro station. He struck a pose looking away from the camera. For the caption, he stated, “Yolo and solo.”Earlier, Kartik Aaryan shared a sun-kissed picture setting the Internet on fire. Apart from his charming personality, what’s special about this picture? The iconic Eiffel tower, obviously. “Paris, Je t’aime [Paris, I love you]” he wrote.Just like many other Bollywood celebrities, Kartik Aaryan also visited Qatar to witness the FIFA World Cup 2022. The actor shared a montage that comprises videos showing him taking a flight to Doha. He seemed truly ecstatic after witnessing the “greatest FIFA final match ever in the history of football.” Kartik recorded various clips from his hotel to the Lusail stadium, and made a nice collage of them all, in the form of a video.  His caption read, “PURE GOOSEBUMPS. Can’t explain what we experienced last night! Bucket list to the infinity. Still can’t believe that we witnessed the Greatest FIFA final match ever in the history of football. The electrifying energy, the vibe of the stadium, of 90,000 people together. Watching Lionel Messi and Kylian Mbappe yesterday in real was unreal. Football at its best…#FIFAWorldCup2022.”Kartik Aaryan was last seen in Freddy alongside Alaya Furniturewalla. Some of his upcoming projects include Shehzada, Satya Prem Ki Katha, and Caption India among others.Featured Video Of The DayKartik Aaryan Clicks Photos With Fans