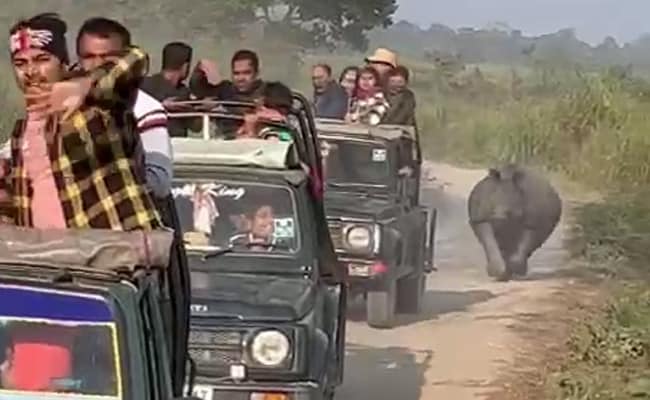 The rhinoceros reportedly chased the convoy for about three kilometers before it went back to the forest.A convoy of safari jeeps is seen barrelling through a narrow track in a national park in Assam with frantic calls of “bhaga (speed up), move, move” in the background. Slowly, the camera pans out, revealing the reason the tourists were screaming in terror – a charging rhinoceros.The rhinoceros reportedly chased the convoy for about three kilometers before it went back to the forest.The incident, which was captured by a tourist on the safari on their phone camera, is now being widely shared on social media.The video is the latest from the Kaziranga National Park in Assam, where several incidents of rhinoceros chasing safari vehicles have been reported recently. Similar incidents have been reported in the Manas National Park also.A similar video from Manas National Park had gone viral on social media recently.The safari jeep was passing through Habari forest area of the park when a  rhinoceros emerged from a bush and started chasing their vehicle.The driver was then seen quickly speeding up and leaving the rhino behind. The large animal, however, continued to chase the vehicle for some time.Experts say such an incident can be attributed to the animals’ unease with continuous human movement in the forest.Kaziranga National Park is home to 2,613 Rhinos and the numbers are increasing, as per the latest census data put out by the national park authority.”There was an increase of 200 individuals from 2018 despite 400 death mainly due to natural causes,” the park authority posted on Twitter in March this year.