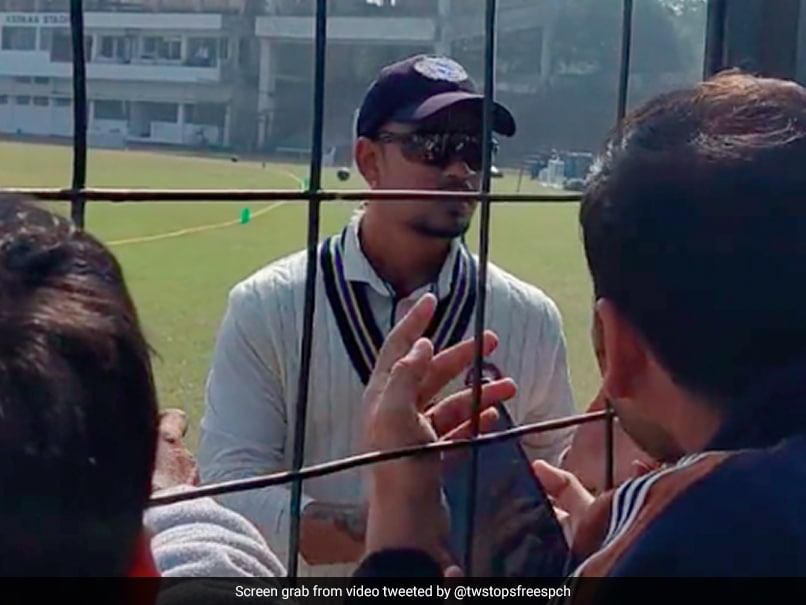 Ishan Kishan clicking pictures with fans during a Ranji Trophy match© TwitterIndian wicket-keeper batter Rishabh Pant was involved in a severe car crash on the Delhi-Dehradun highway while the cricketer was going to his hometown in Roorkee on December 30. While Pant’s luxury car caught fire, he managed to escape, reportedly by breaking the windscreen of the car. As the entire cricketing spectrum and the fans prayed for Pant’s quick recovery, his fellow Indian wicket-keeper Ishan Kishan learned of Pant’s injury during a match from fans. In fact, Kishan was shocked when he came to know of Pant’s accident.Pant suffered several serious injuries, including burns, but was rescued in time by a couple of truck drivers who managed to pull him out of the car. The cricketer was admitted to Max Hospital, Dehradun and could be airlifted to a hospital in Delhi.The 25-year-old said claimed to have said that he had dozed off while driving, as a result of which, his car hit a divider on the road and caught fire.Kishan was busy playing for Jharkhand in a Ranji Trophy match when the news broke and was posing for pictures with fans when someone informed him of Pant’s accident.”Rishabh Pant ka accident ho gaya hai (Rishabh Pant has met with an accident),” a fan said. Shocked to hear what happened, Kishan reacted saying: “Kya? (What)”. Here’s the video of the same:When Ishan kishan came to meet fans during the drinks break,he was so generous&humble. See his reaction on knowing rishabh pants’s car accident. #keenanstadium #jhvsser @ishankishan51 @BCCI @RishabhPant17 @nistula @akhileshsharma1 pic.twitter.com/3uNLnEDRiX— Avishkar (@twstopsfreespch) December 30, 2022A few fans then asked him to not think too much about what had happened and to focus on the match that he had come to play.While Pant’s recovery remains the subject of most importance at present. It has been confirmed that the cricketer is out of danger but as far as his return to the field is concerned, the wicket-keeper is unlikely to play cricket for the next 4-6 months.Featured Video Of The DayFIH Women’s Nations Cup: Victorious Team India Receives Warm Welcome In DelhiTopics mentioned in this article