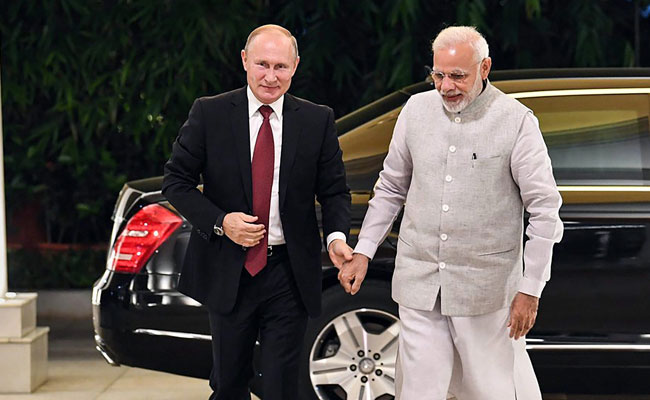 Putin said that Russia and India relying on positive traditions of friendship and mutual respect.Moscow: Russian President Vladimir Putin extended New Year greetings to India and said that the G20 and Shanghai Cooperation Organisation (SCO) presidencies will open new opportunities for building multi-dimensional Russia-India cooperation for the benefit of people, according to the statement released by the Kremlin site.In a message to President Droupadi Murmu and Prime Minister Narendra Modi, Putin said that in 2022, Russia and India marked the 75th anniversary of their diplomatic relations and, relying on positive traditions of friendship and mutual respect, the countries continue to develop their specially privileged strategic partnership, carry out large-scale trade and economic projects in addition to energy, military technology and other areas of cooperation, coordinate efforts in addressing important matters of regional and global agendas, according to the statement.”I am confident that India’s recently started SCO and G20 presidencies will open new opportunities for building multi-dimensional Russia-India cooperation for the benefit of our peoples, in the interests of strengthening stability and security in Asia and the entire world,” Vladimir Putin stressed.Earlier, on Wednesday, UK Ambassador to India Alex Ellis wished India a “Happy New Year” and said that the relationship between the two countries has become stronger this year.In the video message, posted on his Twitter account, Ellis said, “2022 was a great year for India and the UK, and this year UK and India have made their relationship more strong.”Talking about the economical relationship, Ellis said that India and UK have launched the Free Trade Agreement negotiations this year.”Secondly, on climate change and sustainability, we have been supporting India’s rapid transition toward a green economy for example, investment in the Mahindra EV Company. Thirdly, on health, building on the great work of Covishield, we now have Ebola vaccines manufactured in India with UK technology going to Africa,” Ellis said.”On Defence and Security, we are increasing cooperation particularly at sea and in cyberspace to ensure that there is a free and open Indo-Pacific,” he added.He further said that India and UK have reduced the time for visas. An e-Visa for British nationals visiting India will also come out.On December 5, High Commissioner of India to the UK Vikram K Doraiswami announced that India will resume the e-Visa facility for UK citizens travelling to the country.”And of course, we have a PM whose grandparents came from Punjab called Rishi Sunak. Great year, much to do next year. A great year for the G20 in India,” Ellis said in a video message.”The journey is still left and I wish everyone a happy new year,” he concluded the video message.(Except for the headline, this story has not been edited by NDTV staff and is published from a syndicated feed.)Featured Video Of The DayRishabh Pant Injured After His Car Hits Divider, Catches Fire In Uttarakhand