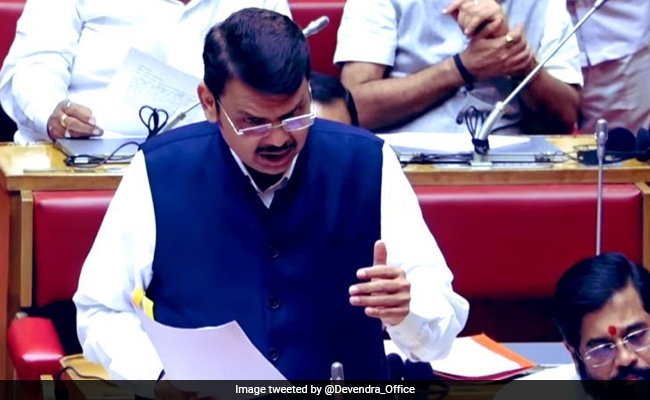 Nagpur: In an apparent attack on Shiv Sena leader Aaditya Thackeray, Maharashtra Deputy Chief Minister Devendra Fadnavis on Friday said that the BJP is not afraid of him or his father and ex-CM Uddhav Thackeray.While ridiculing Aaditya Thackeray’s statement where he jibed at the state government, saying it is scared of a 32-year-old man, Eknath Shinde said that the Maharashtra government is not afraid of even his father.”We are not afraid of even his father. We formed a government in the state by taking 50 MLAs from his party under his nose. He had said that Mumbai would burn, but not even a matchstick was burnt,” Mr Fadnvis said.Deputy Chief Minister was addressing the media after the State Assembly was adjourned sine die.Earlier in the assembly, Mr Fadnavis said that an inquiry into alleged malpractices in Sree Siddhivinayak Temple Trust would be completed within one month.The Winter session of the Maharashtra Legislative Assembly was adjourned sine die on Friday.The next session will begin on February 27 next year in Mumbai.(Except for the headline, this story has not been edited by NDTV staff and is published from a syndicated feed.)Featured Video Of The DayCricket Star Rishabh Pant Survives Horrific Car Crash