The science events to watch for in 2023

Following the successful deployment of mRNA vaccines during the COVID-19 pandemic, a host of them are in development. BioNTech in Mainz, Germany, is expected to initiate first-in-human trials for mRNA vaccines against malaria, tuberculosis and genital herpes in the coming weeks. BioNTech is also collaborating with Pfizer, based in New York City, to trial an mRNA-based vaccine candidate to reduce the rate of shingles. Moderna in Cambridge, Massachusetts, also has mRNA vaccine candidates for the viruses that cause genital herpes and shingles. 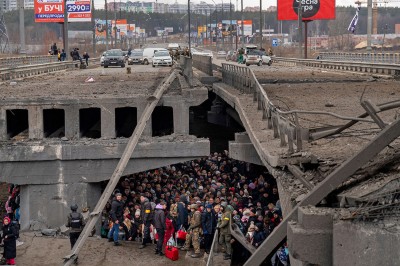 In November, BioNTech and Pfizer began their phase I trial of an mRNA vaccine designed to protect against both COVID-19 and influenza. The combination vaccine contains mRNA strands encoding binding proteins for SARS-CoV-2, Omicron BA.4/BA.5 and four influenza variants.

Others are investigating the possibility of delivering COVID-19 vaccines using fast-acting nasal sprays. These sprays have been effective in animals, but the road to human trials could be long.

The first images from the James Webb Space Telescope (JWST) left the world in awe. Some of the JWST’s findings on the early universe were published this year, and astronomers will continue to share the telescope’s results and discoveries on the evolution of galaxies in the year ahead.

The Euclid space telescope, under development by the European Space Agency (ESA), is intended to orbit the sun for 6 years and capture photos to create a 3D-map of the universe; it is due to blast off in 2023. So is the Japan Aerospace Exploration Agency’s X-ray Imaging and Spectroscopy Mission — an Earth-orbiting satellite that will detect X-ray radiation from distant stars and galaxies.

The Vera Rubin Observatory in Chile is due to start taking images in July 2023. The telescope, which has a special three-mirror design and a camera containing more than 3 billion pixels of solid state detectors, will be able to scan the entire southern sky in just three nights. And the world’s largest steerable telescope — the Xinjiang Qitai Radio Telescope (QTT) in Xinjiang, China — will be switched on. The QTT’s fully steerable dish, spanning 110 metres, will enable it to observe 75% of the stars in the sky at any given time.

The World Health Organization is expected to publish a revised list of priority pathogens. Around 300 scientists will review the evidence on more than 25 viral and bacterial families to identify pathogens that could potentially cause future outbreaks. Research and development roadmaps for each priority pathogen will outline knowledge gaps, set research priorities and guide the development of vaccines, treatments and diagnostic tests.

Just as NASA’s uncrewed Orion capsule splashed back down to Earth on 11 December, three other missions were launched Moonwards: the United Arab Emirates’ Rashid rover, NASA’s lunar flashlight and the Japanese HAKUTO-R Mission 1, which will attempt a soft lunar landing in April. The Indian Space Research Organisation’s third Moon-exploring mission, Chandrayaan-3, will land near the south pole in mid-2023. Next year will also see the first civilian trip to the Moon, with 11 people embarking on a 6-day private spaceflight aboard the SpaceX rocket Starship.

And, in April, ESA will launch its Jupiter Icy Moons Explorer (JUICE) mission, which will aim to study the environment on the giant gas planet and three of its moons.

Next year might herald the first approval of a CRISPR gene-editing therapy, following promising results from clinical trials that used the CRISPR–Cas9 system to treat beta thalassaemia and sickle cell disease, two genetic blood disorders. The exagamglogene autotemcel (exa-cel) treatment is being developed by the Massachusetts companies Vertex Pharmaceuticals in Boston and CRISPR Therapeutics in Cambridge. It works by collecting a person’s own stem cells and using the CRISPR–Cas9 technology to edit the faulty gene, before infusing the cells back into the person. Vertex is expected to apply to the US Food and Drug Administration in March for approval to make exa-cel available to people with beta thalassaemia or sickle cell disease.

The agreement on a loss and damage fund during the 27th United Nations Climate Change Conference (COP27) in Sharm El-Sheikh, Egypt, last month, marked an important step towards climate justice. Under the agreement, wealthy countries that have historically been responsible for high emissions will financially compensate poorer nations, which have borne the brunt of climate change. But the details still need to be worked out. A ‘transitional committee’ is expected to meet before the end of March to make recommendations on how to arrange these funds, which will be presented to delegates from around the world during the United Nations COP28 conference in Dubai next November.

Beyond the standard model

Physicists unveiled the first results of the muon g–2 experiment in April this year, and are expected to publish more precise results in 2023. The experiment studies how short-lived particles known as muons behave in magnetic fields, and creates a sensitive test of the standard model of particle physics.

Another highly anticipated event for particle physicists is the opening of the European Spallation Source (ESS) near Lund, Sweden. The pan-European project will generate intense neutron beams to study the structure of materials, using the most powerful linear proton accelerator ever built. The ESS will welcome its first researchers next year.

In early January, US regulators will announce whether a drug that slowed down the rate of cognitive decline in a robust clinical trial1 can become available to people with Alzheimer’s disease. Developed by the pharmaceutical company Eisai and the biotechnology firm Biogen, lecanemab is a monoclonal antibody that clears amyloid-β protein that builds up in the brain. The clinical trial included 1,795 people with early-stage Alzheimer’s and showed that lecanemab slowed mental decline by 27% compared with a placebo. However, some scientists think this is only a modest benefit and others are concerned about the safety of the drug.

Another Alzheimer’s drug, called blarcamesine — developed by Anavex Life Sciences in New York City — will continue to make its way through clinical trials. Blarcamesine activates a protein that improves the stability of neurons and their ability to connect with each other.

The world’s first nuclear-waste storage facility is due to begin operating next year in Olkiluoto, an island off the southwest coast of Finland. The Finnish government approved construction of the deep-underground repository in 2015, to safely dispose of spent nuclear fuel. Up to 6,500 tonnes of radioactive uranium will be packed in copper canisters, which will be covered with clay and buried inside tunnels of granite bedrock 400 metres underground. The nuclear material will remain sealed off there for several hundred thousand years — by which time the radiation levels will be harmless.