Kamadhenu (Sanskrit: कामधेनु, Kāmadhenu), also known as Surabhi (सुरभि, Surabhī), is a divine bovine-goddess described in Hinduism as Gou Mata, the mother of all cows. She is a miraculous “cow of plenty” who provides her owner whatever he desires and is often portrayed as the mother of other cattle.

In iconography, she is generally depicted as a white cow with a female head and breasts, the wings of a bird, and the tail of a peafowl or as a white cow containing various deities within her body. All cows are venerated in Hinduism as the earthly embodiment of the Kamadhenu. As such, Kamadhenu is not worshipped independently as a goddess, and temples are not dedicated to her honor alone; rather, she is honored by the veneration of cows in general throughout the observant Hindu population.

Hindu scriptures provide diverse accounts of the birth of Kamadhenu. While some narrate that she emerged from the churning of the cosmic ocean, others describe her as the daughter of the creator god Daksha, and as the wife of the sage Kashyapa. Still other scriptures narrate that Kamadhenu was in the possession of either Jamadagni or Vashista (both ancient sages), and that kings who tried to steal her from the sage ultimately faced dire consequences for their actions.

Kamadhenu plays the important role of providing milk and milk products to be used in her sage-master’s oblations; she is also capable of producing fierce warriors to protect him. In addition to dwelling in the sage’s hermitage, she is also described as dwelling in Goloka – the realm of the cows – and Patala, the netherworld. 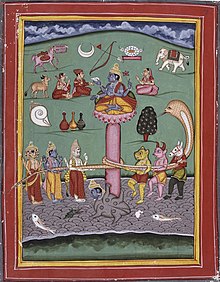 Kamadhenu (left, 2nd from top) depicted in a scene of the Churning of the Cosmic Ocean

The Mahabharata (Adi Parva book) records that Kamadhenu-Surabhi rose from the churning of the cosmic ocean (Samudra manthan) by the gods and demons to acquire Amrita (ambrosia, elixir of life).

As such, she is regarded the offspring of the gods and demons, created when they churned the cosmic milk ocean and then given to the Saptarishi, the seven great seers.She was ordered by the creator-god Brahma to give milk, and supply it and ghee (“clarified butter”) for ritual fire-sacrifices.

The Anushasana Parva book of the epic narrates that Surabhi was born from the belch of “the creator” (Prajapati) Daksha after he drank the Amrita that rose from the Samudra manthan. Further, Surabhi gave birth to many golden cows called Kapila cows, who were called the mothers of the world.

The Satapatha Brahmana also tells a similar tale: Prajapati created Surabhi from his breath.The Udyoga Parva Book of the Mahabharata narrates that the creator-god Brahma drank so much Amrita that he vomited some of it, from which emerged Surabhi.

According to the Ramayana, Surabhi is the daughter of sage Kashyapa and his wife Krodhavasha, the daughter of Daksha. Her daughters Rohini and Gandharvi are the mothers of cattle and horses respectively.

The Matsya Purana notes two conflicting descriptions of Surabhi. In one chapter, it describes Surabhi as the consort of Brahma and their union produced the cow Yogishvari,She is then described as the mother of cows and quadrupeds.

In another instance, she is described as a daughter of Daksha, wife of Kashyapa and the mother of cows.The Harivamsa, an appendix of the Mahabharata, calls Surabhi the mother of Amrita (ambrosia), Brahmins, cows and Rudras. 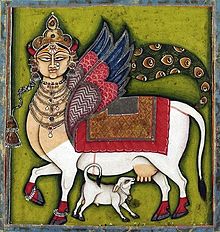 Kamadhenu pictured with her calf

The Devi Bhagavata Purana narrates that Krishna and his lover Radha were enjoying dalliance, when they thirsted for milk. So, Krishna created a cow called Surabhi and a calf called Manoratha from the left side of his body, and milked the cow. When drinking the milk, the milk pot fell on the ground and broke, spilling the milk, which became the Kshirasagara, the cosmic milk ocean.

Numerous cows then emerged from the pores of Surabhi’s skin and were presented to the cowherd-companions (Gopas) of Krishna by him. Then Krishna worshipped Surabhi and decreed that she—a cow, the giver of milk and prosperity—be worshipped at Diwali on Bali Pratipada day.

Various other scriptural references describe Surabhi as the mother of the Rudras including Nirrti (Kashyapa being the father), the cow Nandini and even the serpent-people nāgas. The Mahabharata also makes a passing reference to Surabhi as the mother of Nandini (literally “daughter”) in the context of the birth of Bhishma, an incarnation of a Vasu deity. Nandini, like her mother, is a “cow of plenty” or Kamadhenu, and resides with sage Vashista. Nandini is stolen by the divine Vasus and thus cursed by the sage to be born on the earth.

The Raghuvamsa of Kalidasa mentions that king Dilip—an ancestor of god Rama—once passed by Kamadhenu-Surabhi, but failed to pay respects to her, thus incurring the wrath of the divine cow, who cursed the king to go childless. So, since Kamadhenu had gone to Patala, the guru of Dilip, Vasistha advised the king to serve Nandini, Kamadhenu’s daughter who was in the hermitage. The king and his wife propitiated Nandini, who neutralized her mother’s curse and blessed the king to have a son, who was named Raghu.

In the Ramayana, Surabhi is described to be distressed by the treatment of her sons—the oxen—in fields. Her tears are considered a bad omen for the gods by Indra, the god-king of heaven.The Vana Parva book of the Mahbharata also narrates a similar instance: Surabhi cries about the plight of her son—a bullock, who is overworked and beaten by his peasant-master. Indra, moved by Surabhi’s tears, rains to stop the ploughing of the tormented bullock.

Kamdhenu Wealth and protector of the Brahmin

In Hindu Religion, Kamadhenu is often associated with the Brahmin (“priest class” including sages), whose wealth she symbolizes. Cow’s milk and its derivatives such as ghee (clarified butter) are integral parts of Vedic fire sacrifices, which are conducted by Brahmin priests; thus the ancient Kamadhenu is sometimes also referred to the Homadhenu—the cow from whom oblations are drawn.

Moreover, the cow also offers the Brahmin—who is prohibited to fight—protection against abusive kings who try to harm them. As a goddess, she becomes a warrior, creating armies to protect her master and herself. 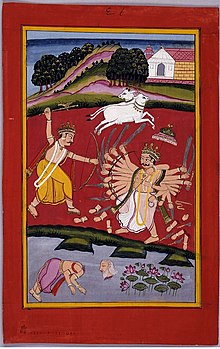 Parshurama slaying Kartavirya Arjuna as Kamadhenu and her calf flee

A legend narrates that the sacrificial cow Kamadhenu resided with sage Jamadagni. The earliest version of the legend, which appears in the epic Mahabharata, narrates that the thousand-armed Haihaya king, Kartavirya Arjuna, destroyed Jamadagni’s hermitage and captured the calf of Kamadhenu. To retrieve the calf, Jamadagni’s son Parashurama slew the king, whose sons in turn killed Jamadagni. Parashurama then destroyed the kshatriya (“warrior”) race 21 times and his father is resurrected by divine grace.

In the Brahmanda Purana, Kamadhenu creates a great city by her power to accommodate Kartavirya Arjuna’s army, when they visit Jamadagni’s hermitage. On returning to his kingdom, Kartavirya Arjuna’s minister, Chandragupta, persuades him to capture the divine cow.

The minister returns to the hermitage and tries to convince the sage to give away the cow, but to no avail, so he tries to snatch Kamadhenu with force. In the ensuing fight, the sage is killed, but Kamadhenu escapes to the sky and Chandragupta takes her calf with him instead.The Brahmanda Purana narrates this Kamadhenu Sushila was given to Jamadagni by the Kamadhenu-Surabhi, who governs in Goloka.

The Brahma Vaivarta Purana narrates that the celestial cow – called Kapila here – produces various weapons and an army to aid Jamadagni defeat the king’s army, who had come to seize her.

When the king himself challenged Jamadagni for battle, Kapila instructed her master in martial arts. Jamadagni led the army created by Kapila and defeated the king and his army several times; each time sparing the life of the king. Finally, with the aid of a divine spear granted to him by the god Dattatreya, the king killed Jamadagni.

The Ramayana presents a similar account about Kamadhenu, however, here the sage is Vashista and the king is Vishwamitra. Once, king Vishwamitra with his army arrived at the hermitage of sage Vashista. The sage welcomed him and offered a huge banquet – to the army – that was produced by Sabala – as Kamadhenu is called in the text.

The astonished king asked the sage to part with Sabala and instead offered thousand of ordinary cows, elephants, horses and jewels in return. However, the sage refused to part with Sabala, who was necessary for the performance of the sacred rituals and charity by the sage. Agitated, Vishwamitra seized Sabala by force, but she returned to her master, fighting the king’s men. She hinted Vashista to order her to destroy the king’s army and the sage followed her wish.

Intensely, she produced Pahlava warriors, who were slain by Vishwamita’s army. So she produced warriors of Shaka–Yavana lineage. From her mouth, emerged the Kambhojas, from her udder Barvaras, from her hind Yavanas and Shakas, and from pores on her skin, Haritas, Kiratas and other foreign warriors. Together, the army of Sabala killed Vishwamitra’s army and all his sons. This event led to a great rivalry between Vashista and Vishwamitra, who renounced his kingdom and became a great sage to defeat Vashista.

Kamadhenu-Surabhi’s residence varies depending on different scriptures. The Anushasana Parva of the Mahabharata tells how she was given the ownership of Goloka, the cow-heaven located above the three worlds (heaven, earth and netherworld): the daughter of Daksha, Surabhi went to Mount Kailash and worshipped Brahma for 10,000 years.

The pleased god conferred goddess-hood on the cow and decreed that all people would worship her and her children – cows. He also gave her a world called Goloka, while her daughters would reside on earth among humans.

In one instance in the Ramayana, Surabhi is described to live in the city of Varuna – the Lord of oceans – which is situated below the earth in Patala (the netherworld). Her flowing sweet milk is said to form Kshiroda or the Kshirasagara, the cosmic milk ocean.

In the Udyoga Parva book of the Mahabharata, this milk is said to be of six flavours and has the essence of all the best things of the earth.The Udyoga Parva specifies that Surabhi inhabits the lowest realm of Patala, known as Rasatala, and has four daughters – the Dikpalis – the guardian cow goddesses of the heavenly quarters: Saurabhi in the east, Harhsika in the south, Subhadra in the west and Dhenu in the north.

Apart from Goloka and Patala, Kamadhenu is also described as residing in the hermitages of the sages Jamadagni and Vashista. Scholar Mani explains the contradicting stories of Kamadhenu’s birth and presence in the processions of many gods and sages by stating that while there could be more than one Kamadhenu, all of them are incarnations of the original Kamadhenu, the mother of cows.

Flu and heart disease: The surprising connection that should convince you to schedule your shot

ISIS Claim Responsibility For Blast At Mosque In Afghanistan’s Kandahar