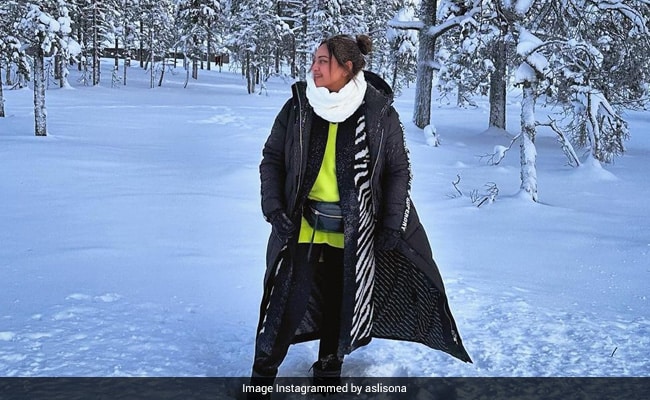 Sonakshi Sinha shared this image. (courtesy: aslisona)New Delhi: Sonakshi Sinha shared picture-perfect moments from her holiday in Finland. The actress, in some of the pictures, can be seen posing with snow-capped mountains. In another shot, she is pictured with a snowman. “What a surreal experience feeling snow for the first time ever…Looking at the stars from inside my aurora cabin, going husky sledging in the vast white expanse, chasing the northern lights and lighting a bonfire in the middle of nowhere, roasting marshmallows, drinking hot chocolate oh and freezing myself at -14 degrees only to get into a hot tub…Saariselka you have my heart,” she wrote.Take a look at Sonakshi Sinha’s post here:Earlier, Sonakshi Sinha shared a couple of pictures from her journey. She wrote: “Our Finland was calling out to me, and I made it there in the comfort of Finnair… Looking forward to experiencing a snowy new year.”Sonakshi Sinha made her big Bollywood debut with the 2010 film Dabangg, opposite Salman Khan. She also featured in the other two parts of the Dabangg series alongside Salman Khan.Sonakshi Sinha has starred in films like Rowdy Rathore, Son Of Sardaar, Dabangg 2, Holiday: A Soldier Is Never Off Duty, Lootera, Once Upon A Time In Mumbai Dobaara, R… Rajkumar, Action Jackson, Kalank, Bhuj: The Pride Of India and Mission Mangal, among others. She was last seen in Double XL with Zaheer Iqbal and Huma Qureshi. She will next be seen in the film Kakuda.Featured Video Of The DayAishwarya, Aaradhya And Abhishek Wish Paparazzi Happy New Year At Airport