“She Led From The Front”: S Jaishankar’s Big Praise For Sushma Swaraj 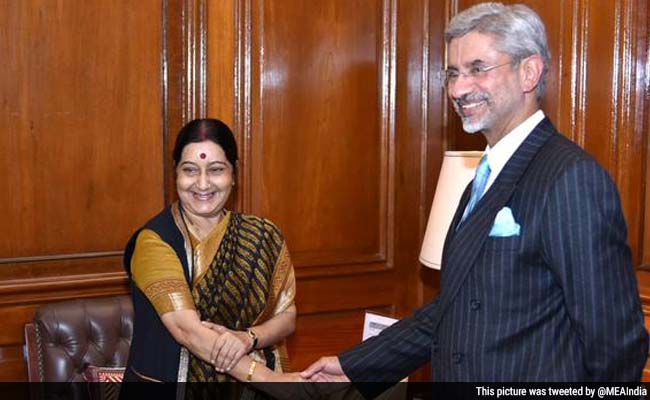 Ms Swaraj passed away on August 6, 2019 at the age of 67, following a cardiac arrest.Vienna: External Affairs Minister S Jaishankar has praised his predecessor late Sushma Swaraj, commending her for being at the forefront in bolstering relations with the Indian expat community.Mr Jaishankar made these comments while addressing Indian expats in the Austrian capital on Sunday.When the minister was asked what foreign policies have changed since Ms Swaraj took over as India’s External Affairs Minister, Mr Jaishankar said: “I’m very glad that you mentioned my predecessor the late Sushma Swaraj ji. The fact that our relationship with the Indian communities abroad are strong and will remain stronger, she led from the front.””I would say in those five years when she was the minister as she was the face and the voice of that message,” Mr Jaishankar said.”And of course, we created a system for that to happen but I still feel that she was so symbolic of that change that I’m personally very grateful that you have recalled her at a time like this,” he added.Ms Swaraj passed away on August 6, 2019 at the age of 67, following a cardiac arrest.An accomplished lawyer, politician and diplomat, Ms Swaraj served as the External Affairs Minister in the first Narendra Modi government from 2014 to 2019.During his address, Mr Jaishankar also praised the contributions of the community in promoting Indo-Austria relations.”When people think of India, they don’t think of a country, they think of a person. They relate to an Indian and the experience they had with that Indian. If that experience with that Indian is good their impression of India flows from there. For me, all the diplomacy I do is nothing compared to the image and the sentiment that you create. So, keep doing what you are doing here. Let us see, our presence continues to grow,” he said.Recalling the challenges faced during the Covid-19 crisis and the Ukraine conflict, he said the Modi government demonstrated that it will do whatever is necessary to take care of its citizens abroad.”During Covid-19 or during the Ukraine crisis, we demonstrated that we will do whatever it takes, including putting our military forces to use to take care of Indians, and we do that because when people speak about the rise of India and taking its place in the world, the first duty of any country or government is to take care of its people. It’s something that is a very deep belief of the Prime Minister himself,” he added.(Except for the headline, this story has not been edited by NDTV staff and is published from a syndicated feed.)Featured Video Of The DayBJP Jumpstarts Mission Election: Can Opposition Catch Up?