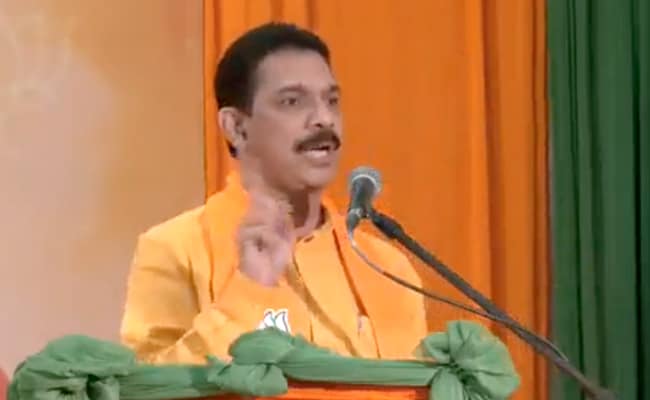 Nalin Kateel made the comments at a party meeting in Karnataka.Bengaluru: The BJP’s Karnataka chief has advised his party workers to focus on fighting “love jihad” instead of “minor issues” like road and sewage problems.Nalin Kateel, a BJP MP, made the comments at a party meeting on Monday in Karnataka, where elections are due later this year.”I am asking you people – don’t speak about minor issues like road and sewage. If you are worried about your children’s future and if you want to stop ‘love Jihad’, then we need BJP for that. To get rid of love jihad, we need BJP,” Mr Kateel said in a pep-talk for booth-level workers of the party.The opposition Congress slammed the remarks, accusing the ruling party of trying to polarize voters.”This is the worst (reply). They are not looking at development, they are looking at hate, they are looking at dividing the country…That is why we are only looking at development,” said DK Shivakumar, the Karnataka Congress chief.”They are just playing people on emotion. We want jobs, we want that price rise should not affect people, we are worried about the daily living of people,” he told reporters.With elections just months away, rightwing groups in Karnataka have been urging the BJP government to crack down on so-called love jihad, the term they use while accusing Muslim men of “trapping” Hindu women in relationships and forcing them to convert.Various BJP-ruled states like Maharashtra, Madhya Pradesh and Uttar Pradesh are considering laws to deal with “love jihad”. Karnataka has a law against forced conversions, but Hindu hardliners want a separate law for cases of “love jihad”.