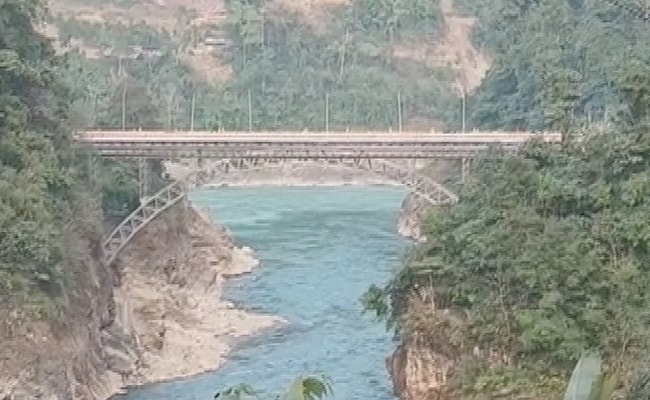 Mr Singh’s visit to Arunachal comes a month after Indian and Chinese troops clashed in the Tawang sector.New Delhi: Defence Minister Rajnath Singh will inaugurate the Siyom Bridge In Arunachal Pradesh’s Siang district today along with 27 other infrastructure projects constructed by the Border Roads Organisation (BRO).The 28 projects have been completed at a cost of Rs 724.3 crore to facilitate the quick movement of Indian armed forces along sensitive border areas.The Defence Minister will inaugurate the 100-metre-long steel arch Siyom Bridge over River Sayom. The bridge is strategically important as it gives the military advantage in deploying troops to the far-flung areas of the Line of Actual Control (LAC).”Leaving New Delhi for Dibrugarh on a two-day visit to Assam and Arunachal Pradesh. Shall attend the inaugural ceremony of several infrastructure projects constructed by Border Roads Organisation (BRO) in seven border States. Looking forward to it,” Rajnath Singh tweeted on Monday.Mr Singh will inaugurate the other 27 projects virtually from the Siyom Bridge site in Arunachal Pradesh at 11 AM.@BROindia is proud to present it’s 28 infrastructure projects that have been completed at a cost of Rs 724.3 Cr. This will make it to 103 infrastructure projects completed by @BROindia in year 2023 at a cost of Rs 2897 Cr. These 28 projects will be dedicated to the Nation by(1/2) pic.twitter.com/PnKXvrTDhL— 𝐁𝐨𝐫𝐝𝐞𝐫 𝐑𝐨𝐚𝐝𝐬 𝐎𝐫𝐠𝐚𝐧𝐢𝐬𝐚𝐭𝐢𝐨𝐧 (@BROindia) January 2, 2023Some of the other projects include Basti Bridge on Bani-Basohli-Bhadarwah road in Jammu and Kashmir. It is a 55-metre-long bridge constructed over Haloon Nallah to establish connectivity between Doda and Kathua district.The Bhaironghati-Nelong road, a 24-kilometre-long road close to the Indo-Tibet border in Uttarakhand was constructed by the BRO and will “serve as a lifeline for troops” deployed in the region.Thangu Bridge, an 80-foot-long permanent bridge was constructed on the strategic Kalep-Gaigong Road in north Sikkim to assure all-weather connectivity to commuters. It will also help the armed forces deploy troops and equipment in forward areas.Mr Singh’s visit to Arunachal Pradesh comes a month after Indian and Chinese troops clashed along the LAC in the Tawang sector.In a statement in Parliament, the Defence Minister said that the Indian Army bravely stopped China’s People’s Liberation Army (PLA) from encroaching on Indian territory, and forced them to retreat.”On December 9, 2022, PLA troops tried to transgress the LAC in the Yangtse area of Tawang sector and unilaterally change the status quo. The Chinese attempt was contested by our troops in a firm and resolute manner. The ensuing face-off led to a physical scuffle in which the Indian Army bravely prevented the PLA from transgressing into our territory and compelled them to return to their posts,” Mr Singh said in the Lok Sabha.Mr Singh added that no Indian troops were killed or seriously injured in the incident.