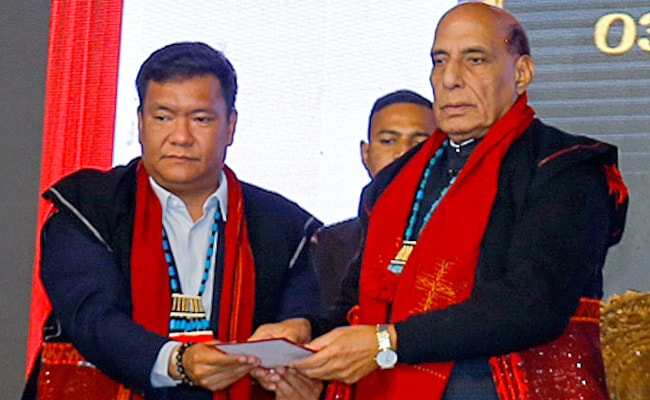 Rajnath Singh today dedicated to the nation 28 infrastructure projects including bridges and roadsNew Delhi: Defence Minister Rajnath Singh today dedicated to the nation 28 infrastructure projects including bridges and roads in strategically-key areas of Ladakh, Arunachal Pradesh, Sikkim and Jammu and Kashmir among others to boost military preparedness and spur socio-economic growth.The Defence Minister unveiled the projects, built at a cost of Rs 724 crore, at a function held at the Siyom bridge on the Along-Yinkiong road in Arunachal Pradesh, in his first visit to the border state that came three-and-a-half weeks after an attempt of transgression by the Chinese troops in the Tawang sector of the Line of Actual Control (LAC).The projects comprised 22 bridges including the Siyom bridge, three roads and three other projects. Eight of these projects are in Ladakh, five in Arunachal Pradesh, four in Jammu and Kashmir, three each in Sikkim, Punjab and Uttarakhand and two in Rajasthan, according to the defence ministry.In his address, Rajnath Singh also made an indirect reference to the Chinese PLA’s attempts of transgressions along the LAC.”Recently, our forces effectively countered the adversary in the Northern sector and dealt with the situation with bravery and promptness. This was made possible due to adequate infrastructural development in the region,” he said.”This motivates us even more for the progress of far-flung areas,” he said.There has been a fresh spike in tensions between India and China after troops from the two sides were engaged in a clash along the LAC at Yangtse in the Tawang sector of Arunachal Pradesh on December 9.On December 13, Rajnath Singh told Parliament that the Chinese troops tried to “unilaterally” change the status quo in the Yangtse area but the Indian Army compelled them to retreat by its firm and resolute response.He described the projects as a testament to the concerted efforts of the government and the Border Roads Organisation (BRO) towards the development of border areas in order to enhance the operational preparedness of the armed forces and ensure socio-economic development of the far-flung regions.Apart from the infrastructure projects, Rajnath Singh also inaugurated three telemedicine nodes, two in Ladakh and one in Mizoram.”The world is witnessing a number of conflicts today. India has always been against war. It is our policy. Recently, Prime Minister Narendra Modi drew the world’s attention to that resolve when he said ‘this is not the era of war’,” Rajnath Singh said.”We do not believe in war, but if it is forced upon us, we will fight. We are ensuring that the nation is protected from all threats. Our Armed Forces are ready and it is heartening to see that the BRO is walking shoulder-to-shoulder with them,” he said.In a meeting with Russian President Vladimir Putin in Uzbekistan’s Samarkand on September 16, Modi nudged him to end the Ukraine conflict and said “today’s era is not of war”.In his remarks, the defence minister asserted that it is the top priority of the Modi government to connect the border areas and ensure the development of its residents.The event at Along-Yinkiong Road witnessed the physical inauguration of the strategically-important Siyom Bridge, while the other projects were dedicated virtually.The bridge is a state-of-the-art 100-meter long steel arch superstructure.Rajnath Singh also highlighted the crucial role played by the BRO in bolstering India’s security through infrastructure development in border areas.Terming infrastructure development as a game changer for the people residing in border areas, Rajnath Singh lauded the BRO for ensuring socio-economic development in far-flung regions.He stressed that the government is paying special attention to the development of the Northeastern region, which has strengthened the country’s security system.For the BRO’s relentless efforts to support the armed forces and the local people, he also coined a new phrase “BRO is the nation’s bro (brother)”.Quoting a famous phrase ‘It’s not the destination, it’s the journey’, he said the construction of road infrastructure in border areas is a journey for BRO and a strong and prosperous India should be its destination.With the inauguration of these 28 projects, which were completed in 2022, a total of 103 infrastructure projects of BRO were dedicated to the nation in the year at a total cost of Rs 2,897 crore.In October last year, 75 projects, worth Rs 2,173 crore, were inaugurated by Rajnath Singh from Shyok village in Ladakh.In 2021, 102 such projects built by the BRO at a cost of Rs 2,229 crore were dedicated to the nation by Rajnath Singh. (Except for the headline, this story has not been edited by NDTV staff and is published from a syndicated feed.)Featured Video Of The Day”Mere Bade Bhai”: Watch This Exchange Of Love Between Gandhi Siblings