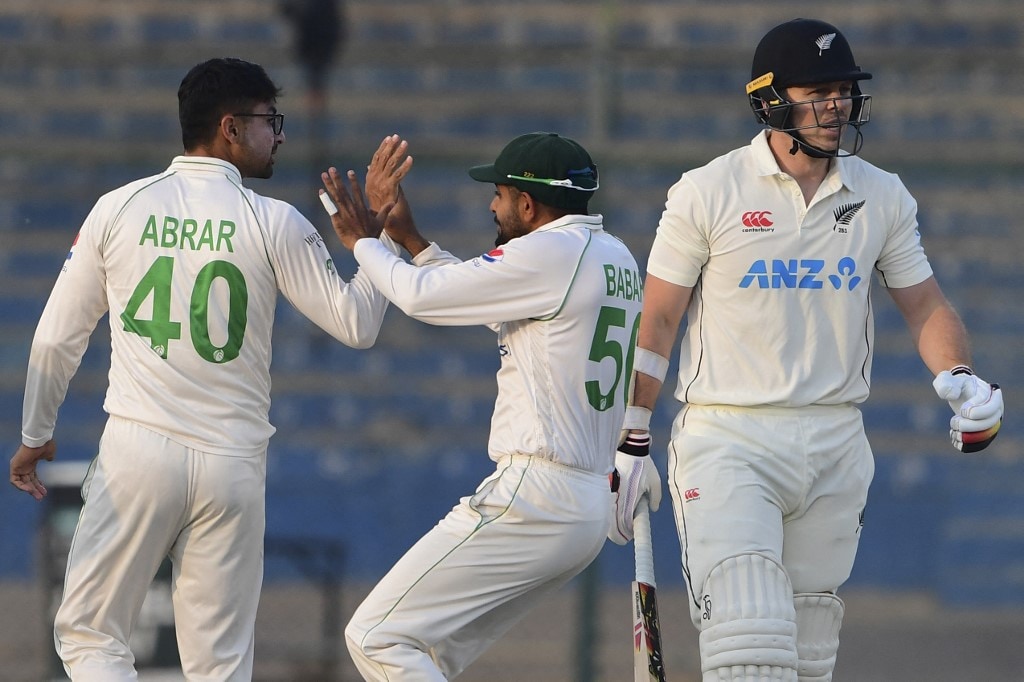 A draw last week having stopped a run of defeats for Pakistan and New Zealand, both sides will be seeking to go one better in the second and final Test in Karachi starting Monday. The tame draw halted Pakistan’s four-Test losing streak at home including their first-ever 3-0 whitewash by England. New Zealand also arrived in Pakistan on the back of a 3-0 drubbing by England. Pakistan skipper Babar Azam vowed his team will play “positive and aggressive cricket” after they finished 2022 without a Test win at home.”We need to take things session-by-session and day-by-day,” he said.”We’re working on it. It’s not that we need to play different cricket.”New Zealand were in a good position to win the first Test on the final day with Pakistan on 77-2, needing 97 runs to avoid an innings defeat.xBut Saud Shakeel, who scored 55 not out, and Mohammad Wasim with 43 averted the danger with a 71-run eighth wicket stand eating up time and overs to salvage a draw.Pakistan declared on 311-8 but a target of 138 in 15 overs under fading light was tough for New Zealand, who finished on 59-1.”We need to credit New Zealand with the way they played and dominated,” said Azam, who finished the year as the highest scorer in Tests with 1,184 in nine matches.The National Stadium pitch helped slow bowlers as 23 of the 28 wickets in the first Test went to the spinners.At the same venue but on a different pitch, New Zealand will also look for a win after going without in their last five Tests.”It does look different from the first Test… It has a bit more moisture,” said batting coach Luke Ronchi on Sunday.”The preparations are shorter than normal, obviously we had just a two-day turnaround.”It’s going to be a hard slog to get a result, you have to bat really well and need to take 20 wickets.”Pakistan will look to bring in pacer Naseem Shah or Hasan Ali, while New Zealand may consider Matt Henry in place of a spinner if they find the pitch suitable for pace.Teams (from):Pakistan: Babar Azam (captain), Abdullah Shafique, Abrar Ahmed, Hasan Ali, Imam-ul-Haq, Kamran Ghulam, Mohammad Nawaz, Mohammad Rizwan, Mohammad Wasim, Naseem Shah, Nauman Ali, Sarfaraz Ahmed, Agha Salman, Saud Shakeel, Shan Masood, Zahid MahmoodNew Zealand: Tim Southee (captain), Michael Bracewell, Tom Blundell, Devon Conway, Matt Henry, Tom Latham, Daryl Mitchell, Henry Nicholls, Ajaz Patel, Glenn Phillips, Ish Sodhi, Blair Tickner, Neil Wagner, Kane Williamson, Will YoungUmpires: Alex Wharf (ENG) and Aleem Dar (PAK)TV umpire: Ahsan Raza (PAK)Match referee: David Boon (AUS)(This story has not been edited by NDTV staff and is auto-generated from a syndicated feed.)Featured Video Of The DayAnurag Thakur Felicitates Indian Blind Cricket Team After T20 World Cup WinTopics mentioned in this article