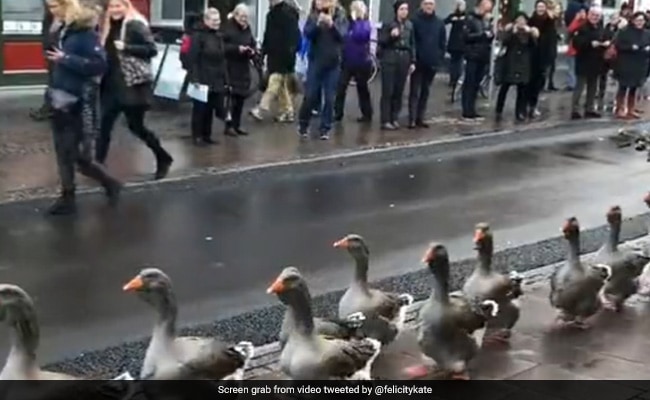 The video has collected over 2 million views on TwitterAn old video has surfaced on the internet of a goose parade in Denmark’s Odense. The video shows a gaggle of geese marching to the beats of drums.Posted by a Twitter user Fliss, the video shows a platoon of geese marching down a Dutch pavement. The march was led by a woman dressed in traditional clothes and an elderly woman is seen at the end of the parade playing the drums.”No I just did not scream oh my god at this video,” the caption of the video reads. The video was originally posted by a Tiktok user dogan2021.Watch the video here:NO I JUST DID NOT SCREAM OH MY GOD AT THIS VIDEO pic.twitter.com/91lnMexOlx— Fliss (@felicitykate) February 19, 2022Since being posted, the video has collected over 2 million views on Twitter. A user wrote, “these are regular geese right they aren’t like some sort of fascist bird symbology? I want to love this without reservation.”Another user commented, “Seen it before, but I love it, so I’m happy to see it again! Makes me want more than just 2.”The third user wrote, “Those aren’t geese! Those are band members who didn’t keep up with band practice. They were cursed by the one with the drums and turned into geese. She’s a witch, I tell ya! A witch!””This gave me goosebumps,” the fourth user wrote.Click for more trending newsFeatured Video Of The DayFormer Maharashtra Home Minister Anil Deshmukh Out On Bail