No “Compromise On National Security” To Maintain Good Relations: Minister 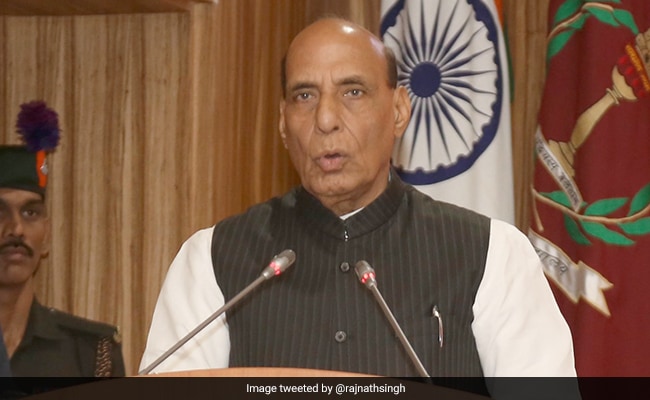 Rajnath Singh said that self-reliance has been an intrinsic part of India’s culture. (File)Thiruvananthapuram: Defence Minister Rajnath Singh on Friday said India wants to have and maintain friendly relations with its neighbours, but it will not be done at the cost of national security.Speaking at the 90th annual pilgrimage of Sivagiri Mutt here, Mr Singh recalled former Prime Minister Atal Bihari Vajpayee’s remark that we can change friends but not our neighbours.”Therefore, we need good and friendly relations with our neighbours. However, we will not compromise on national security to maintain good relations. We do not want good relations with anyone at the cost of our national security,” the Defence Minister said.Mr Singh also spoke about Kerala-based social reformer Sree Narayana Guru’s teachings, like ‘prosperity through industry’ which is the basis of the Indian’s government’s ‘Atma Nirbhar Bharat’ policy.As a result of the same, the country is considered as one of the top five economies in the world and our military is seen as a force to be reckoned with, he contended.”His preaching of prosperity through industry is the basis of the Government of India’s resolution of ‘Self-reliant India’. Today, India is one of the largest economies of the world because of its hard work and enterprise. Today, India has become one of the top five economies of the world,” Mr Singh said.”The world today recognises India as military power to be reckoned with, due to the government’s pitching for ‘Self-reliant India’ which is based on ‘Prosperity through industry’ preaching of Sree Narayana Guru,” the Defence Minister said.Mr Singh said that self-reliance has been an intrinsic part of India’s culture and Sree Narayana Guru spread this message in the public through his teachings, and Sivagiri Mutt was also working to take it forward continuously.He further said that while he was working to protect the “body” — boundaries — of India with the help of the armed forces and under the guidance of Prime Minister Narendra Modi, the saints of the math were working to protect the soul of the country.”I appreciate the work you are doing. We can survive as a nation only when both the body and soul are safe,” Mr Singh said and expressed confidence that this year’s annual pilgrimage would also be a success.In January 1928, Vallabhasserry Govindan Vaidyar and T K Kittan jointly requested Guru to have a Sivagiri pilgrimage as all the higher classes and others had their own pilgrim centres, but ‘avarnas’ had nowhere to go, according to the math website.Guru gave his consent to the proposal and fixed a date of first of January of every year for the pilgrimage, prior to which pilgrims have to maintain a 10-day long austere life and wear only yellow clothes, the website said.The Defence Minister, at the event, also condoled the death of Prime Minister Narendra Modi’s mother — Hiraben.Mr Singh said that when he learned about the tragic news he was contemplating returning to Delhi, but the Prime Minister told everyone that all should fulfill their official commitments before coming back.”So on behalf of everyone here, the Sivagiri Mutt and myself, I would like to pay tribute to Ma Hiraben,” he said.Thereafter, a one-minute silence was observed by everyone present there.Earlier, in his speech, he said many allege liberty, equality and fraternity are not part of Indian tradition and ideologies and that it reached us through the French Revolution.”However, that is incorrect. Sources of liberty, equality, fraternity and world peace can be seen in Indian culture. In fact, the concept of human equality can be seen in our ancient texts and the preaching and literary works of saints, philosophers and poets of the ‘Bhakti’ period.”Rather, they took it a step forward by talking of universal equality, equality between all living things or the whole world being one family,” he claimed.Mr Singh also said that it was the far-sightedness of Sree Narayana Guru that he ordered Sivagiri Mutt to spread consciousness among the common people on subjects like education, cleanliness, etc.”With the grace of Guruji and the blessings of revered saints, our government has also focused its special attention on these subjects,” he said.Sivagiri Mutt is a famous tourist pilgrimage place in Varkala town of Thiruvananthapuram district in Kerala.The math is also headquarters of Sree Narayana Dharma Sangham, an organisation of Sree Narayan Guru’s disciples and followers.(Except for the headline, this story has not been edited by NDTV staff and is published from a syndicated feed.)Featured Video Of The DayPM Modi Virtually Flags Off Bengal’s 1st Vande Bharat Train

How to See a Green Comet Hurtle Past Earth