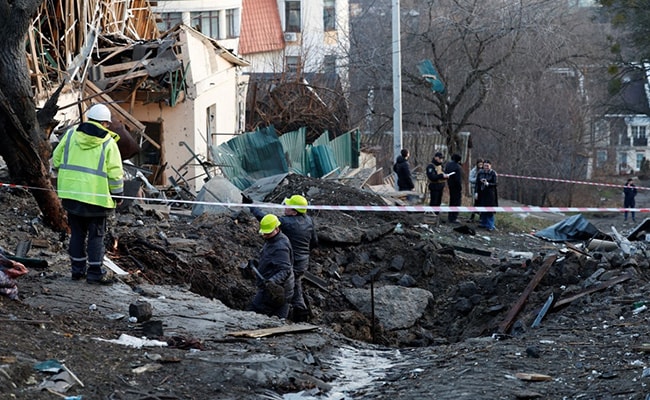 The attacks came as Vladimir Putin’s offensive in Ukraine enters its 11th month.Moscow: Moscow said on Sunday its New Year attacks on Ukraine targeted the pro-Western country’s drone production, claiming it had managed to scupper Kyiv’s “terror attacks” against Russia.In a New Year’s Eve assault, Moscow attacked Kyiv and other Ukrainian cities with missiles and Iranian-made drones. As a result of the New Year’s strikes, three people died and 50 were injured in Ukraine, authorities said.Russia’s defence ministry said a strike hit “the facilities of the military-industrial complex of Ukraine” which is involved in the production of drones.”Storage facilities and launch sites” for the drones have also been destroyed, the ministry said in a statement.”The aim of the strike was achieved,” the statement said. “The plans of the Kyiv regime to carry out terrorist attacks against Russia in the near future have been thwarted.”Kyrylo Tymoshenko, the deputy head of President Volodymyr Zelensky’s office, said that two people died in Kyiv and the southern region of Kherson and 50 were injured as a result of the Russian strikes.A 22-year-old woman died from her wounds in the western city of Khmelnytskyi, governor Sergiy Gamaliy said on Sunday.The attacks came as Russian President Vladimir Putin’s offensive in Ukraine enters its 11th month.After a series of humiliating military defeats, Russia in October began targeting Ukraine’s infrastructure, leaving millions in the cold and dark.Russia has accused Ukraine of targeting its military sites and infrastructure. Russian forces on Thursday shot down a drone near Engels, a base for Russia’s strategic aircraft, located hundreds of kilometres from Ukraine’s border. Russia also said on Monday it downed a drone over Engels airfield and that falling debris killed three people. On December 5, Moscow said Ukraine’s Soviet-made drones had attacked that base and another in the Ryazan region, leaving three people dead.The Engels drone raids were the deepest reported strikes into Russian territory since the start of Moscow’s offensive in Ukraine on February 24.(Except for the headline, this story has not been edited by NDTV staff and is published from a syndicated feed.)Featured Video Of The DayProtests In Assam Over Move To Merge 4 Districts With Existing Ones