New Year 2023: Inside Alia Bhatt And Ranbir Kapoor’s Festivities With Aditya Roy Kapur And Others 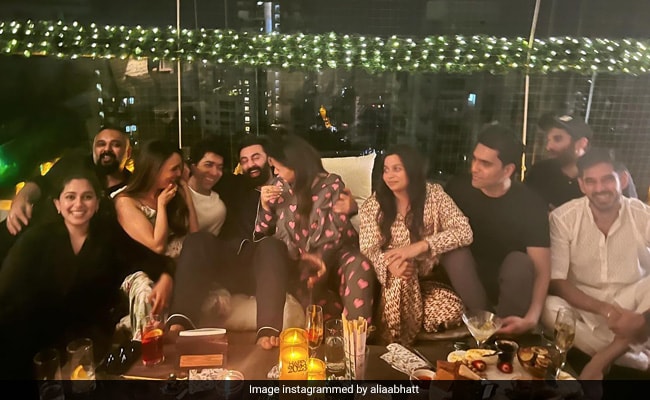 Alia Bhatt shared this picture. (courtesy: aliaabhatt)New Delhi: Alia Bhatt and Ranbir Kapoor hosted a New Year party at their house in Bandra for their friends on Saturday. The couple hosted a pyjama party, which was attended by Aditya Roy Kapur, Ayan Mukerji, Shaheen Bhatt, Luv Ranjan with his wife Alisha Vaid, and Rohit Dhawan with his wife Jaanvi Desai. Offering a glimpse of their party, Alia shared several adorable pictures on her Instagram handle and wrote, “Happy new new .. with my loveliest ones.” In the images, Alia can be seen in a grey pyjama set while Ranbir can be seen in a black pyjama set.  Alia’s sister Shaheen can also be seen in an off-white printed pyjama set. Alia Bhatt has also shared two solo pictures of herself in which she is sitting on a balcony in a grey pyjama set and a 2023 headband. Check out the post below: Check out pictures of Aditya Roy Kapoor, Ayan Mukerji and Rohit Dhawan arriving at Ranbir and Alia’s house: For Alia Bhatt and Ranbir Kapoor, 2022 was a great year as they got married in April and welcomed their first child, a daughter, Raha, on November 6.  A few days ago, Alia Bhatt shared a video on her Instagram handle featuring pictures that never made it to Instagram. The album included some wedding memories, a picture from the sets of Heart of Stone and images from her babymoon. In the caption, she wrote, “pics that never made it to the gram.”Here have a look: Meanwhile, on the work front, Alia and Ranbir were last seen in Ayan Mukerji’s Brahmastra. Next, Alia will be seen in RockyAur Rani Ki Prem Kahani and Heart Of Stone. On the other hand, Ranbir Kapoor has Animal and Tu Jhoothi Mai Makkaar in the kitty.Featured Video Of The DayAirport Spotting: Ananya Panday, Manoj Bajpayee, Parineeti Chopra Fly Out Of Mumbai