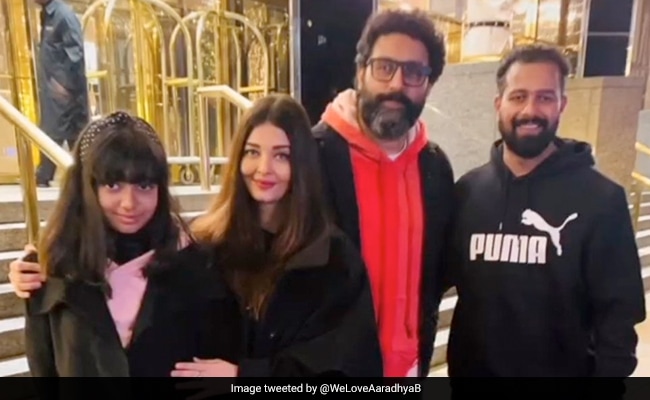 Aaradhya, Aishwarya with Abhishek.(courtesy: WeLoveAaradhyaB)New Delhi: Aishwarya Rai Bachchan, husband Abhishek and daughter Aaradhya welcomed 2023 in New York, where they were holidaying. A couple of pictures of the Bachchans posing with a fan in New York have been trending on social media. The pictures have been curated by several fan pages dedicated to the actors. Aishwarya Rai Bachchan, Abhishek Bachchan and Aaradhya landed in Mumbai on Tuesday morning. Aishwarya and Aaradhya happily wished the paparazzi Happy New Year as they made their way out of the Mumbai airport.Check out the pictures shared by a fan club:Triple A spotted in NYC!!#AaradhyaBachchan#AishwaryaRaiBachchan#AbhishekBachchanpic.twitter.com/uoMFX4UW0e— Aaradhya Rai Bachchan Official ARB (@WeLoveAaradhyaB) January 2, 2023Aishwarya, Abhishek and Aaradhya Bachchan filmed at the Mumbai airport. Watch the video here:Abhishek and Aishwarya, co-stars of Umrao Jaan, Guru, Kuch Naa Kaho and Raavan among others, got married on April 20, 2007. The couple welcomed their daughter Aaradhya in 2011.In terms of work, Aishwarya Rai Bachchan was last seen in Mani Ratnam’s Ponniyin Selvan alongside Trisha, Vikram, Karthi, Jayam Ravi, Sobhita Dhulipala and Aishwarya Lekshmi. The second part of the film will release on April 28.Abhishek Bachchan was last seen in the second season of Amazon Prime Video’s Breathe: Into The Shadows . He also starred in Dasvi, co-starring Nimrat Kaur and Yami Gautam. He will also feature in Ghoomer, for which he began shooting on his birthday last year.Featured Video Of The DayAthiya Shetty And Boyfriend KL Rahul’s Airport Diaries