For Shanaya Kapoor, This Is What “A Day In Paris” Looks Like 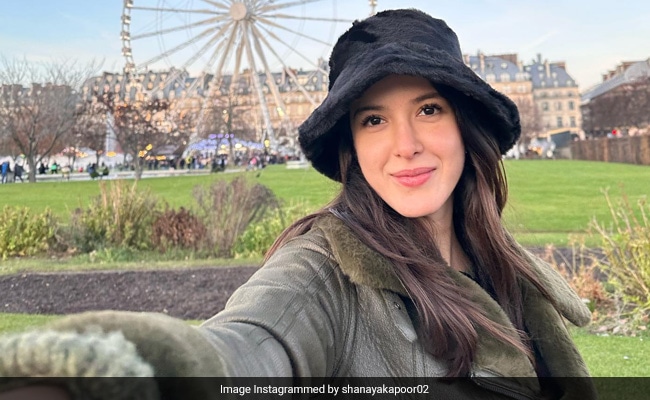 Shanaya Kapoor shared this image. (courtesy: shanayakapoor02)Shanaya Kapoor is leaving us awestruck. Reason? Her swoon-worthy pictures from Paris. Shanaya, who is all set to make her Bollywood debut with Bedhadak, is currently holidaying in the city of love. Shanaya treated us to a photo dump on Instagram featuring glimpses from her “day in Paris”. The first two pictures show her in a stunning OOTD. Whereas, the third one is a video of a swing ride. Paris’ art scene is unbeatable and how can you not visit museums during your visit? So, Shanaya also went to the iconic Louvre Museum and shared some slides from there. Don’t miss the iconic Mona Lisa painting. Shanaya wrote, “A day in Paris,” with a croissant emoji. Shanaya’s parents couldn’t stop themselves from dropping a comment under the post. Sanjay Kapoor mentioned, “Happy holidays,” with red heart emojis and Maheep Kapoor stated, “My baby,” with several heart emojis and an evil eye emoji.Shanaya Kapoor tries to keep it real on social media. Some days ago, Shanaya shared a post featuring her makeup-free look. She also mentioned a skincare woe in the caption. “Lazing around in the (Sun emoji) with some pimple cream on #plssssgoaway,” wrote Shanaya.Before this, when Shanaya Kapoor was in Qatar for the FIFA World Cup, she kept her followers in the loop through several pictures and videos. The actress spent some quality time with her family also. In one of the pictures, we saw her dressed in a blue and grey ensemble while Jahaan, her brother, kept it simple with a jeans and T-shirt. The clear waters and the skyline, in the background, totally complemented the beautiful picture. Shanaya just wrote “Jahaan” with a yellow heart emoji.  Sharing another set of pictures from France Vs Morocco World Cup Semi-Finals match, Shanaya Kapoor said, “It’s game day #2! Unforgettable. No better feeling than experiencing the FIFA World Cup with family and friends! [Heart emoji] missed you, Maheep Kapoor.” Maheep Kapoor replied to the post and said, “Missed you guys more. My love.”On the work front, Shanaya Kapoor has made cameo appearances in both seasons of The Fabulous Lives Of Bollywood Wives. She is gearing up for her Bollywood debut with Karan Johar’s Bedhadak. It is directed by Shashank Khaitan. Apart from Shanaya, the movie will also feature Gurfateh Pirzada and Lakshay Lalwani.Featured Video Of The DayKatrina Kaif-Vicky Kaushal, Twinning And Winning At The Airport