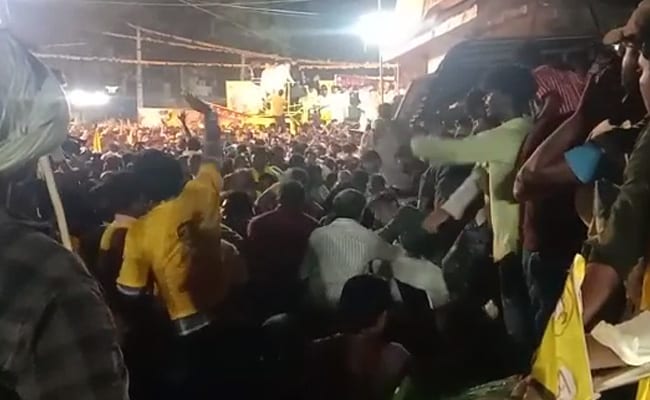 The police said the rally had indeed taken a narrow road.Hyderabad: After the death of eight people in a stampede during Chandrababu Naidu’s roadshow in Andhra Pradesh yesterday, the ruling YSRCP says the former Andhra Pradesh Chief Minister is only interested in showcasing his popularity. This led to the overcrowding and the tragedy, they said, citing the example of the Godavari Pushkar stampede in 2015, when 29 people died.Eight people had died and 10 were injured when many of them fell into an open ditch by the side of the road in Nellore district’s Kandukur town yesterday ahead of a roadshow and public meeting by Mr Naidu, which was part of his ‘Idemi Kharma Mana Rashtraniki (why is our state facing this fate?)” campaign.The rush started as Mr Naidu’s convoy was to reach the area in the evening. As the huge crowd pressed forward, some people fell in an open drainage canal which passed alongside. Ten people were injured.Mr Naidu met the bereaved families today. The party has announced a compensation of Rs 24 lakh for each bereaved family. “We will provide financial assistance, medical treatment to the injured and support the education of children,” Mr Naidu has said.Though the roadshow and public meeting had police approval, leaders of the ruling YSR Congress accused Mr Naidu of trying to create a “fake hype” on his popularity by crowding narrow lanes to give the impression of big crowds. This, they said, had led to the tragedy.”They are choosing narrow streets, putting all people in one place and taking drone shots to upload and promote on social media,” said YSRCP MLA Abdul Hafeez.The police said the rally had indeed taken a narrow road. “There are deviations like firecrackers and bike rally. The main rally went into narrow street that was very congested,” said Vijay Kumar, the chief of police in Nellore.Mr Naidu has been holding roadshows and public meetings across the state in the last one month, ahead of state and Lok Sabha elections in 2024.His son Nara Lokesh will also go on a foot march from January 27 for 400 days, covering 4,000 km.Featured Video Of The DayKiara Advani And Sidharth Malhotra Fly Out For Holidays

Your Rao’s Jar Might Have the Wrong Soup Inside