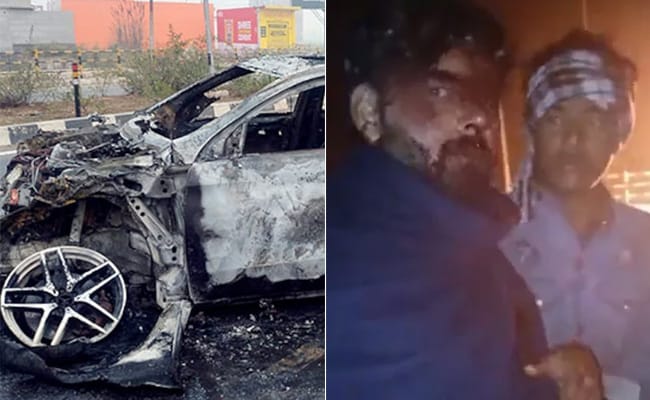 Rajat and Nishu, the two persons who took star Indian wicketkeeper-batter Rishabh Pant to the hospital, visited the India southpaw at the Max Hospital in Dehradun on Monday. Speaking to ANI, Rajat detailed how they saved Pant and took him to the hospital. “We saw him first and his condition was serious. We provided him help. A driver named Sushil and a bus conductor dialled 108 to call for help. We did not know who he was, but for the sake of humanity, we covered his body with clothes so as to save his life. We sent him to Saksham Hospital in an ambulance,” Rajat told ANI.Rajat said Pant was in pain and given a painkiller injection in the ambulance, adding that a dupatta was tied around his head to stop excessive bleeding.They handed over Rs 4,000 in cash, which belonged to the cricketer, to the police administration. Pant had lost the money during the accident.”All the other remnaining items were burnt,” Rajat said.Meanwhile, the star wicketkeeper-batter “is doing well and has been shifted to a private suite due to fear of infection”, said Delhi and District Cricket Association (DDCA) director Shyam Sharma on Monday. He is limping but has no injuries on the foot, back and head, he informed further.”Due to fear of infection, we told his family and hospital administration to shift him to a private suite. He is doing better and will recover soon,” Sharma told ANI.Uttarakhand Chief Minister Pushkar Singh Dhami on Sunday announced that the state government will provide all help for the treatment of the 25-year-old, who was seriously injured in a road accident near Roorkee on December 30 while on his way to surprise his mother.Pant was alone in the car and reportedly fell asleep at the wheel when the accident happened.(This story has not been edited by NDTV staff and is auto-generated from a syndicated feed.)Featured Video Of The DayKolkata’s Tribute To Messi; Rally Full Of White And Blue Takes Over CityTopics mentioned in this article