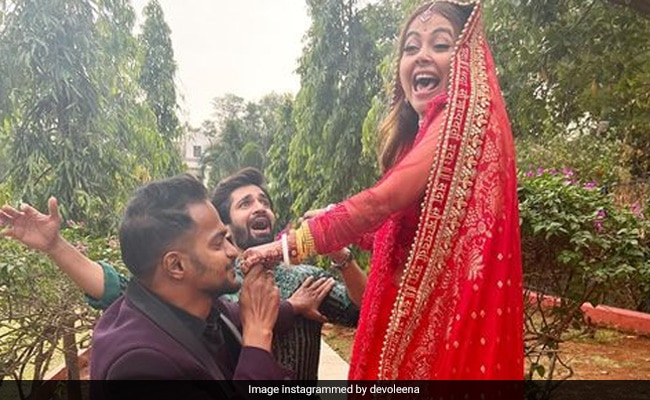 Devoleena shared this image. (courtesy: devoleena)New Delhi: Devoleena Bhattacharjee surprised all her fans when she married her fitness trainer Shahnawaz Shaikh, earlier this month. Since then the actress has been treating her Instafam to snippets from the festivities. Now, Devoleena has shared a fresh set of pictures from her wedding album. The actress has labelled the pics as the “most hilarious one” of the year. The picture features Devoleena with husband Shahnawaz and her rumoured ex-boyfriend Vishal Singh. Along with the pictures, the actress wrote, “And, the most hilarious one of the year 2022.” For those who don’t know, Devoleena and Vishal were rumoured to be dating. The duo, in an Instagram post earlier this year stated that they are engaged. Later, in an interview with ETimes, Devoleena clarified that the engagement was a prank. “It is silly how people assumed that Vishal and I got engaged. Vishal has been one of my best friends since I did Saathiya and the entire world knows it. We were not engaged then, we are not engaged now. He has been my closest friend and people should know that it was just a prank to promote my music video.”Devoleena Bhattacharjee is best known for her character Gopi Bahu in the show Saath Nibhaana Saathiya. The actress, at the time of her wedding announcement post, shared a set of frames featuring herself and her husband Shahnawaz Shaikh. The note attached to the post read, “And yes proudly I can say I am taken and yes Shonu. Chiraag lekar bhi dhoondti toh tujh jaisa nahi milta. You are the answer to my pain and prayers. I love you Shonu. Lots of love to you all. Keep us in your prayers and bless us. The mysterious man urff The Famous #SHONU and tum sab k Jija.”Sharing a video from the wedding day, Devoleena Bhattacharjee added, “Just [read heart emoji]. Thank you, Shonu, for always being there when nobody even bothered to ask if I am doing well or not. Thank you for making me feel the way I always wanted to be. Thank you for being protected and caring and loving. And, most importantly, respecting me and accepting me with my flaws. Bohot kuch kehna chati hun. But filhaal itna hi Thank you so much, Shonu, for everything.”Devoleena Bhattacharjee also shared glimpses from her first Christmas after her wedding. On the work front, Devoleena Bhattacharjee was also part of Bigg Boss 13Featured Video Of The DayPathaan: Censor Seeks Changes, Its Chief Cites Need For “Right Balance”