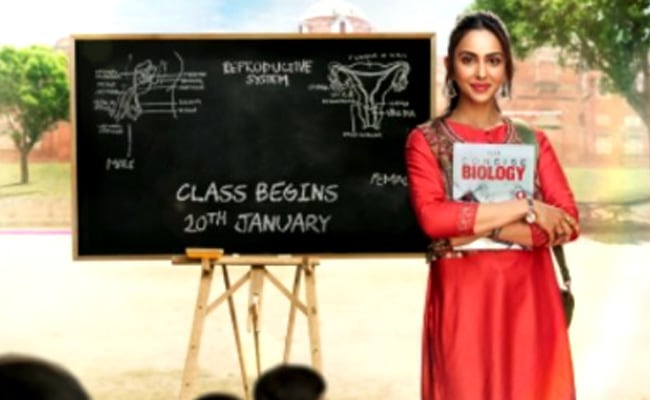 A still from the video. (courtesy: rakulpreet)Mumbai (Maharashtra): Bollywood actor Rakul Preet Singh on Wednesday announced the release date with a motion poster of ‘Chhatriwali’.Taking to Instagram, Rakul treated fans with yet another poster. Sharing the motion poster, she wrote, “No more bunking, it’s time for learning with #Chhatriwali on #ZEE5, premieres 20th Jan.” The motion poster showcased the classroom scenario where Rakul Preet Singh could be seen standing near the blackboard and with books in her hands. Produced by Ronnie Screwvala and directed by Tejas Prabha Vijay Deoskar’, ‘Chhatriwali’ aims to drive home a strong social message on the importance of male contraceptives and safe sex.A slice-of-life film set in Haryana, ‘Chhatriwali’ is headlined by Rakul who plays the quality control head in a condom factory.Though she is shy and embarrassed about her job initially, she soon realises the importance of safe sex and then takes it upon herself to destigmatise the conversation around sex education. Without being too preachy, the film sets the tone and delivers the message with humour and sensitivity while ensuring that the narrative is entertaining and family-friendly.Talking about her role, Rakul said, “For me every film of mine has been special but Chhatriwali is extra special for many reasons. After so many years in the industry, I am finally getting to headline a film and what better than an entertaining film with a thought-provoking social message. This World Aids Day, I join the fight against HIV by raising awareness on the importance of safe sex and the use of male contraceptives via my upcoming film, Chhatriwali.”Manish Kalra, Chief Business Officer, ZEE5 India said, “After the success of two path breaking films like Helmet and Janhit Mein Jaari, we are happy to bring forth ‘Chhatriwali’ which deals with a taboo subject of Sex education in a progressive and an entertaining manner. The film delivers a punch about the importance of sex education with humour and sensitivity. With a mix of social message, strong woman character, comedy, subtlety, and lots of drama, Chhatriwali is sure to entertain and educate our audience”.Producer Ronnie Screwvala, RSVP Movies added, “We are happy to back strong female-led stories with a meaningful narrative and Chhatriwali is just that. Without sounding too preachy, we have made a mass family entertainer laced with an important message because the idea is to normalize conversations about sex education and safe sex. The power of cinema is such that it enables us to deliver impactful stories that entertain and educate audiences.”The film also stars Sumeet Vyas.Featured Video Of The DayNysa Devagn Returns From Dubai Holiday