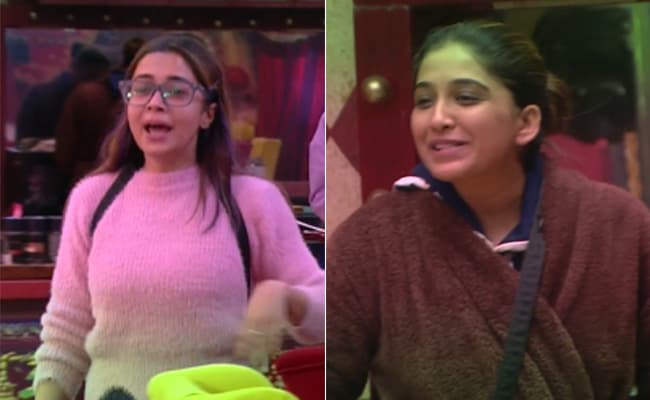 A still from the video. (courtesy: colorstv)Tina Datta and Nimrit Kaur Ahluwalia may have given us glimpses of a strong bond of sisterhood in the initial days of Bigg Boss 16, but their equation has changed for the worse since then. In a recent episode of the reality show, Tina and Nimrit are seen arguing about cleanliness in the kitchen. The clip begins with Nimrit walking into the kitchen area and Tina exclaiming that the counter is dirty. “How is one supposed to clean?” Tina, who is cooking, asks Nimrit. “If you can ignore this area where you are cooking then you can ignore that area too. It was left uncleaned because it got late at night,” Nimrit replies, asking Tina to not interfere. When Tina continues to speak about the issue, the two start bickering. But Tina says that Nimrit was the one who started the conversation about specific kitchen areas, blaming particular contestants. Then Nimrit Ahluwalia taunts Tina Datta and Shalin Bhanot for their confusing friendship to which Tina says, “Archana part two aa gayi hai kitchen main (Archana 2.0 has entered into the kitchen),” and insinuates that Nimrit is trying to get attention.The same episode also saw contestants raise questions about the relationship between Tina Datta and Shalin Bhanot. While Archana Gautam describes Tina and Shalin’s love story as “fake”, Soundarya Sharma wonders how their actions will be perceived outside. Sajid Khan refers to the two actors as “top level ke fraud log hai (this is a top-level fraud)” and MC Stan says,“Bahut time se ye logo ka koi show nahi aaya isilye ye sab fake kar rahe (They haven’t done a show in a while)”. This week, Priyanka Chahar, Nimrit Kaur, Abdu Rozik, MC Stan and Shiv Thakare are safe from elimination. The latest edition of Bigg Boss 16 is available for viewing on Colors TV from Monday to Friday at 10 PM. The weekend episodes, which also include Salman Khan’s Weekend Ka Vaar, air at 9.30 PM.  The show is also available on the streaming platform Voot Select with a 24*7 stream.Featured Video Of The DaySaiee Manjrekar’s Airport Diaries