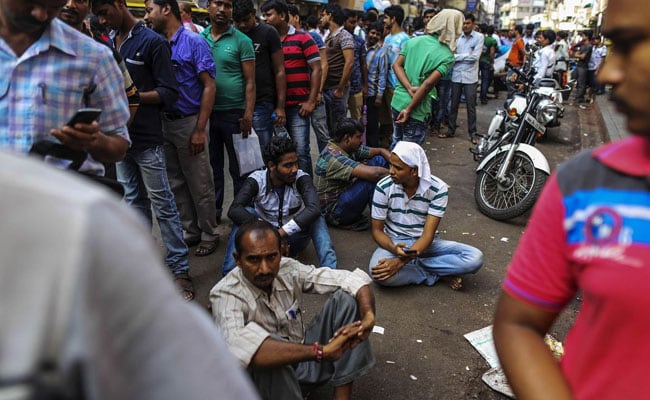 The opposition alleges that the demonetisation was a failure of the government (File)New Delhi:
The Supreme Court is likely to give its verdict today on petitions challenging the centre’s decision of November 2016 to ban currency notes of Rs 1,000 and Rs 500 denominations. The move had withdrawn Rs 10 lakh crore from circulation overnight. Here are the top 10 updates on this big storyFifty-eight petitions were filed in the Supreme Court challenging the notes ban, arguing that it was not a considered decision of the government and should be struck down by the court.The government has argued that the court cannot decide a matter when no tangible relief can be granted. It would be like “putting the clock back” or “unscrambling a scrambled egg”, the centre said.A five-judge Constitution bench headed by Justice SA Nazeer heard the arguments before its winter break and on December 7, suspended the verdict. The other members of the bench are Justices BR Gavai, BV Nagarathna, AS Bopanna and V Ramasubramanian. Justice BR Gavai and Justice BV Nagarathna have authored two separate judgments, it’s learnt.The centre said the demonetisation was a “well-considered” decision and part of a larger strategy to combat the menace of fake money, terror financing, black money and tax evasion.Former Union Minister and senior advocate P Chidambaram argued that the centre has not examined alternate methods to control fake currency or black money.The government, he said, cannot initiate any proposal on legal tender on its own. This, he said, can only be done on the recommendation of the central board of the Reserve Bank of India (RBI).The centre was also withholding crucial documents on the decision-making process, including its letter to the Reserve Bank dated November 7 and the minutes of the meeting of the bank’s central board, Mr Chidambaram argued.When the bank’s counsel argued that judicial review cannot apply to economic policy decisions, the court said the judiciary cannot fold its hands and sit just because it is an economic policy decision.The RBI admitted that there were “temporary hardships” which are part of the nation-building process. The problems were solved by a mechanism, it said in its submission.The opposition alleges that the demonetisation was a failure of the government, destroying businesses and ending jobs. Congress chief Mallikarjun Kharge said, “Six years after the ‘masterstroke’ the cash available in public is 72 per cent higher than that in 2016. PM (Narendra Modi) is yet to acknowledge this epic failure that led to fall of economy.”Post a comment Featured Video Of The DayBJP Jumpstarts Mission Election: Can Opposition Catch Up?