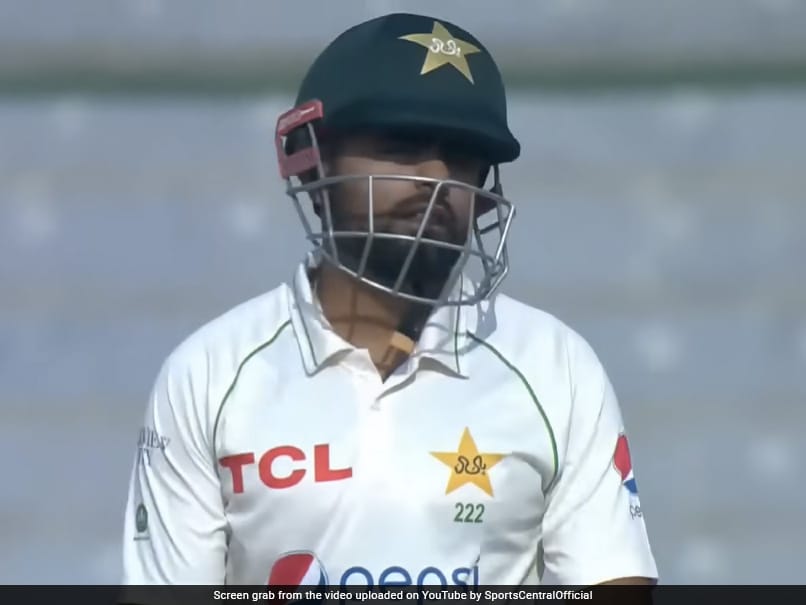 Babar Azam was dismissed while trying to play a ball outside his off stump on Tuesday.© YouTubePakistan were all out for 438 Tuesday in the first innings of their Test against New Zealand in Karachi. Middle-order batter Agha Salman scored a maiden century before being last man out on 103 after Pakistan resumed on 317-5. Skipper Babar Azam fell in the first over of the day without adding to his overnight score of 161. For New Zealand, fast bowler Tim Southee took 3-69, completing 350 Test wickets in his 89th Test.Fast bowler Tim Southee forced an edge off Azam’s bat off the fourth ball of the day to wicketkeeper Tom Blundell to give a kickstart to New Zealand. Azam struck 16 boundaries and a six in his 365-minute knock.Watch: Babar Azam Is Frustrated After Falling Into Tim Southee’s TrapThe highlight of Pakistan’s batting was 103 by Agha Salman, who anchored the innings after skipper Babar’s dismissal. Salman hit 17 boundaries during his 155-ball knock.Pakistan also lost Nauman Ali (seven) and Mohammad Wasim (two) in the first session, which produced just 60 runs. Salman added 54 runs for the seventh wicket before New Zealand took two wickets in the space of three runs. Pacer Neil Wagner had Nauman caught off a short-pitched delivery before Wasim was caught behind off spinner Ish Sodhi.Salman then cut loose, hitting two successive boundaries off Sodhi to complete three figures. His previous best of 62 was against Sri Lanka at Galle in July.Southee, who finished with 3-69, finally ended the innings by trapping Salman leg before, completing 350 wickets in his 89th Test. He is the third New Zealand bowler behind Richard Hadlee (431 in 86 Tests) and Daniel Vettori (362 in 113) to take 350 or more wickets in Tests.Featured Video Of The DayHardik Pandya to Lead In T20Is Vs Sri LankaTopics mentioned in this article