Best known for formulating the theory of evolution by natural selection, independently of Charles Darwin, Alfred Russel Wallace is an appealing if enigmatic figure. The appeal stems in part from his underdog status: poor and self-educated, Wallace had none of Darwin’s social and financial advantages. The enigma comes from his keen embrace of a range of eccentric non-scientific causes, including spiritualism, phrenology and anti-vaccination (for smallpox).

Scientists do not like their scientific heroes to bear the taint of irrational thinking. Wallace’s enthusiasms have therefore contributed to him becoming marginalized in the history of evolutionary thought. Most people know about Darwin and the HMS Beagle. But what about Wallace and the Helen?

The Helen story is worth revisiting because it shows Wallace at his resolute best. Despite numerous disastrous career setbacks — of which the Helen episode was the most severe — he persevered and eventually succeeded as a scientist.

More than 150 years after Wallace’s experience on the Helen, doing science continues to be hard and can be disappointing. Wallace’s misadventure provides both perspective and an object lesson in how to navigate setbacks. His response to problems showcases his most inspiring traits: his commitment to science, his almost superhuman resilience and his refusal to mire himself in self-pity.

In his first job as a land surveyor, Wallace developed an interest in the plants he encountered as he tramped across the countryside. Then, in 1844 at the age of 21, he met Henry Walter Bates, who would later discover ‘Batesian mimicry’ (whereby members of a palatable prey species gain protection by mimicking an unpalatable one).

Bates, two years Wallace’s junior, had a fixation with beetles, and he catalysed Wallace’s transformation from hobbyist naturalist to serious collector. Wallace’s new-found focus on beetles transcended mere entomological stamp-collecting; he developed an interest in some of the great scientific questions of the time. He was particularly inspired by the anonymously published Vestiges of the Natural History of Creation (1844) by Robert Chambers, which put forward a vision of a transmutational process, with life progressing from simple to complex.

Without money or connections, Wallace and Bates aspired to careers in science at a time when the field was the preserve of the moneyed elite. They would have to fund their scientific explorations by collecting and selling specimens. After a hasty choice of destination — tropical South America — and a crash course in collecting methods, Wallace, aged 25, and Bates, aged 23, arrived in Belém, Brazil, in May 1848 (see ‘Doggedly determined’).

Alfred Russel Wallace tends to be unjustly relegated to a footnote in the Charles Darwin story. He was, in fact, a pioneering biologist who refused to let disadvantage or disaster prevent him from pursuing his scientific dreams.

January 1823: Alfred Russel Wallace is born in Usk in Wales.

May 1848: Wallace and Henry Walter Bates arrive in Belém, Brazil.

May 1856: Citing the Sarawak Law paper, geologist Charles Lyell alerts Darwin to the possibility that Wallace is developing ideas similar to Darwin’s.

February 1858: Wallace sends his paper on natural selection to Darwin from Ternate in the Maluku islands (Moluccas), Indonesia.

July 1858: The joint Darwin–Wallace paper is presented at the Linnean Society in London.

November 1859: Darwin’s On the Origin of Species is published.

The two split up early on, with Wallace concentrating on the Amazon River’s northern tributary, the Rio Negro, and Bates on the southern fork, the Solimões.

Collecting was challenging. The Amazon’s ubiquitous ants often deprived science of hard-won specimens. Crucial collecting materials also disappeared: Wallace once recovered from a bout of fever to discover that local people had drunk the cachaça (a Brazilian rum) he’d been using to pickle specimens. Transport was a constant headache, with travel upstream past rapids requiring unwieldy portages of canoes and cargo. And thanks to his collecting, the cargo became ever more voluminous and unwieldy.

Wallace and Bates sporadically sent back shipments of material to their agent in London, Samuel Stevens, who publicized their adventures in scientific journals and sold their specimens, taking a 20% commission. 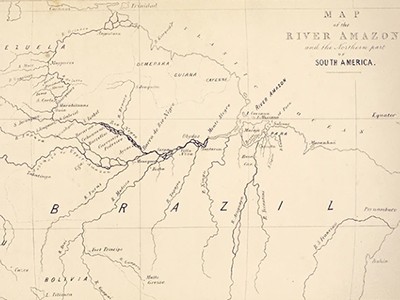 Wallace’s journeys on the Rio Negro and its tributaries took him into areas that had not yet been visited by Europeans. He saw (and collected) an extraordinary array of species, many of them new to science. He had a chance to observe and collect artefacts from several Indigenous groups with little or no previous contact with Europeans. As he travelled, Wallace capitalized on his surveying skills to map the terrain. But the remoteness took its toll. He made an “inward vow never to travel again in such wild, unpeopled districts without some civilised companion or attendant”1.

Wallace was frequently ill, on one occasion nearly lethally so. His younger brother came out to join him as an assistant in 1849 but died of yellow fever two years later in Belém, on his way back to England. Wallace learnt that his brother was sick but had to wait many anxious months before news of his death made it upriver.

In 1852, after four years of exploring and collecting, it was time for Wallace himself to head home. He envisaged a triumphant return. He would complement his collections of preserved organisms with a menagerie of living ones. Mr Wallace’s biological wonders would surely be the toast of scientific London.

On 12 July in Belém, Wallace boarded the Helen, a freighter ship bound for London. The trip across the continent to Belém had not gone smoothly. The authorities in Manaus, Brazil, had had to be persuaded to release some of his earlier shipments meant for London, which they had impounded, making the final haul aboard the Helen even larger. But now all that remained was the long voyage back across the Atlantic. Wallace, who shared Captain Turner’s cabin, was the only passenger.

Three weeks into the voyage, Captain Turner interrupted Wallace’s morning routine to tell him that the ship was on fire.

Friction caused by the rocking of the ship had ignited poorly stowed cargo. Attempts to intervene were counterproductive — removing the hold covers merely oxygenated the fire — and soon the ship became what Wallace later called “a most magnificent conflagration”1.

Captain Turner gave the order to abandon ship, and the scramble to prepare two small wooden boats began. Having been stored on deck in the tropical sunshine, both boats leaked badly. The cook had to find corks to plug their hulls.

Before he left the ship, Wallace “went down into the cabin, now suffocatingly hot and full of smoke, to see what was worth saving”1. He retrieved his “watch and a small tin box containing some shirts and a couple of old note-books, with some drawings of plants and animals, and scrambled up with them on deck”1. He tried to lower himself on a rope into one of the small boats, but fever-weakened, he ended up sliding down the rope, stripping the skin off his hands.

With fine weather, the best hope of rescue lay in other ships seeing the fire. The two boats duly circled the burning wreck for the next 24 hours, meaning that Wallace got to witness every moment of the tragedy. The animals he had brought with him on the long river journey across the continent, now free from their cages, sought refuge on the one part of the ship still untouched by the flames, the bowsprit. Wallace watched as the monkeys, parrots and more — his pets as well as his best hope of impressing London’s scientific elite — were incinerated.

The hoped-for rescue did not immediately materialize, and Captain Turner turned the two open boats towards Bermuda, 1,100 kilometres away to the northwest.

As the days ticked by, the situation became increasingly desperate. Water ran low and the tropical sun left Wallace’s “hands and face very much blistered”1. Wallace nevertheless remained upbeat, later recalling that during one night, he “saw several meteors, and in fact could not be in a better position for observing them, than lying on [his] back in a small boat in the middle of the Atlantic”1.

Finally, ten days into the ordeal, salvation appeared on the horizon in the form of the Jordeson, a creaking and already overladen cargo ship bound for London.

With the immediate crisis past, the magnitude of what had happened started to sink in. In a letter2 written aboard the Jordeson to botanist Richard Spruce (see go.nature.com/3prhbdk), Wallace tallied his catastrophic losses — “almost all the reward of my four years of privation & danger was lost” — and concluded with characteristic understatement, “I have some need of philosophic resignation to bear my fate with patience and equanimity.” 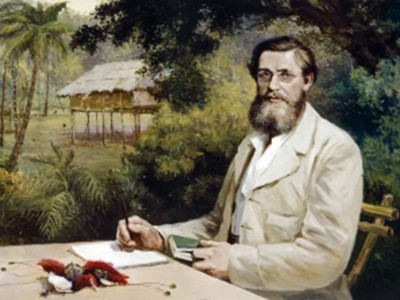 The Jordeson finally limped into Deal, England, on 1 October 1852. Wallace had been at sea for 80 days. His outward voyage with Bates had taken only 29 days.

Wallace added a PS to his letter to Spruce. First there was immediate exhilaration about the return — “Such a dinner! Oh! beef steaks & damson tart”. But then came thoughts about the future: “Fifty times since I left Pará [Belém] have I vowed if I once reached England never to trust myself more on the ocean.” Even then, he noted that “good resolutions soon fade”.

Stevens had thoughtfully taken out insurance. So Wallace had £200 (US$980 at the time) — a fraction of his collections’ actual value — to cover his costs for a year in London while he tried to salvage what he could from the disaster and make future plans.

He rushed out two books, one a travelogue, the other a more technical account of the palm trees of the Amazon. Neither did well — 250 copies remained unsold a decade later from the travel book’s print run of 750. But he was getting his name out there. Stevens, too, had a done a good job of publicizing Wallace’s discoveries while Wallace had been away.

Perhaps most crucially, the positive response of the UK Royal Geographical Society to his mapping work of the Rio Negro yielded a free steamship ticket to Singapore.

In March 1854, less than 18 months since the Jordeson’s bedraggled arrival at Deal, Wallace departed from Southampton in England for what he would call the “central and controlling incident”2 of his life.

Eight more years of perilous travel awaited. So, too, did the discoveries of what came to be known as Wallace’s Line (a boundary between the Asian and Australasian biogeographic regions) and of the theory of evolution by natural selection3,4.

The scientific acclaim that greeted Wallace’s return from southeast Asia in 1862 was a just reward both for his contributions and for that phenomenal doggedness — his determination, despite everything, to be a scientist.