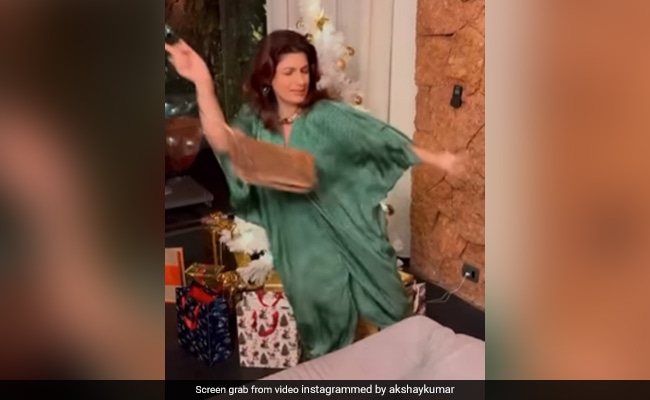 Twinkle Khanna in a still from the video. (courtesy: akshaykumar)New Delhi: Akshay Kumar’s birthday wish for wife Twinkle Khanna is the definition of adorable. He posted a video of the author dancing as she sings Staying Alive. Akshay Kumar, in his note for Twinkle Khanna, wrote that he loves her but she should stop singing. “While you may be glad to have missed my live performance the other day, I’m glad I get to witness you and all your madness every single day! But as much as I love you, I really think you should stop singing And Happy birthday Tina,” read his caption. Twinkle Khanna and Akshay Kumar have been married for over 21 years. Twinkle Khanna and Akshay Kumar co-starred in films such as International Khiladi and Zulmi. The couple are parents to 20-year-old son Aarav and daughter Nitara, 10.Check out Akshay Kumar’s post for wife Twinkle Khanna:Akshay Kumar and Twinkle Khanna never fail to give couple goals. On the 7th season of Karan Johar’s talk show Koffee With Karan when KJo asked Akshay Kumar, “If Chris Rock made a joke about Tina (Twinkle Khanna), what would you do?” Akshay Kumar’s reply was: “I would pay for his funeral. Because she would kill it.” Akshay also revealed during the show that he stalks wife Twinkle Khanna on Instagram. “I think my wife’s Instagram because you never know what she is going to write. I have to be careful all the time. I have to keep stalking all the time,” he saidTwinkle Khanna is a celebrated columnist and the author of Pyjamas Are Forgiving, The Legend Of Lakshmi Prasad and Mrs Funnybones – all of which were best-sellers. Twinkle is also an interior decorator, the owner of The White Window, and a film producer. Her last project as a film producer was the National Award-winning film PadMan, which starred her husband Akshay Kumar in the lead role. She also runs a digital content company called Tweak India.Featured Video Of The DayOn His 57th Birthday, Salman Khan Greets Fans From His Balcony