A to Z of Christmas: Traditional Dishes From Around The World To Feast On 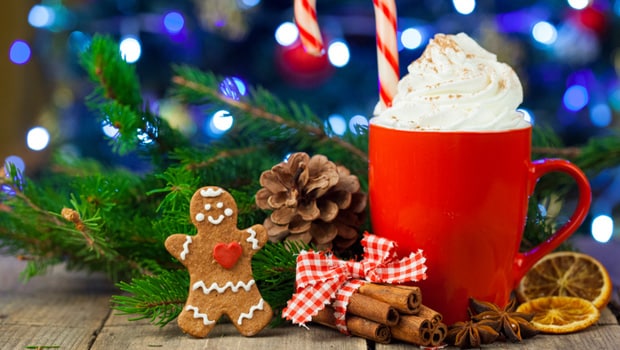 Apple cider is a non alcoholic beverage. Photo Credit: IstockB- Bread PuddingThis is a bread-based dessert, which is originally from England but it is popular in many other countries as well. Traditionally, it is made of stale bread, milk and eggs with a variety of other ingredients. The bread is soaked in the milk with other ingredients and then baked golden. Bread pudding is a bread-based dessert. Photo Credit: IstockC- Cranberry SauceThis is a sauce or relish made with fresh cranberries. It is served during the Christmas dinner in United Kingdom with roast turkey. The sweet and sour flavour is loved by many. This is a sauce or relish made with fresh cranberries.​D- DiplesDiples or Thiples is a Greek dessert, made up of thin sheets of flour. The dough is rolled and folded and then fried in hot oil. Finally, it is dipped in sugar or honey syrup and then served. The dough can be shaped into various forms – the most popular being bow ties.E- EggnogIt is a rich and creamy beverage traditionally made with milk, sugar, cream and eggs and is served chilled. It is most popular in the United States during Christmas but people enjoy it all along the holiday season.(Also read: How to Make Homemade Eggnog)It is made up of milk, sugar, cream and eggs. Photo Credit: IstockF- Fruitcake:It is a moist cake made with candied or dried fruits, nuts and spices. Making the fruit cake is a popular Christmas tradition observed all around the world. The nuts are usually soaked in rum well in advance that adds a nice kick to the cake. It is a moist cake made with candied or dried fruits, nuts and spices.​ Photo Credit: IstockG- GingerbreadAs the name suggests, gingerbread is flavoured with ginger and a host of other spices such as cloves, nutmeg and cinnamon. It is sweetened with honey, sugar and molasses. You can use the batter to make a lovely gingerbread cake or turn it into a batch of gingerbread cookies. Gingerbread is sweetened with honey, sugar and molasses. Photo Credit: IstockH- Hot ChocolateAlso known as hot cocoa, this wonderful beverage needs no introduction. There’s nothing better than curling up with a hot chocolate and enjoying the cold weather. Hot chocolate is also known as hot cocoa.Photo Credit: Istock I- Irish StewThis wholesome main dish is made with meat and seasonal root vegetables. The warm stew is often served as a part of the Christmas dinner. It originated in Ireland and the recipe might vary from region to region but it is usually made with lamb meat. This wholesome dish is made with meat and seasonal root vegetables. Photo Credit: IstockJ- JulebrusThis is a Norwegian soft drink, made with strawberries and raspberries. Since it is non-alcoholic, a lot of kids and teenagers enjoy this drink on Christmas. As for the adults, you’ll often find them sipping the traditional Juleol (Christmas Ale).K- KransekakeThis is a traditional Danish and Norwegian dessert. It is made in a form of concentric rings of cakes, each layered over the other trying to make a cone shape. Traditionally, it is an 18-layered cake with snowy white frosting.L- LebkuchenThis is similar to ginger bread and the flavour varies from spicy to sweet. It originated in Germany and uses lots of honey, spices and nuts. This is similar to ginger bread . Photo Credit: Istock M- Mulled WineThis is a warm alcoholic beverage, made with red wine, spices and some herbs as well. It is believed to have been created by the Romans to protect themselves from the cold winters during Christmas time and the tradition has continued over the years. Mulled wine is made with red wine, spices and some herbs. Photo Credit: IstockN- Nut RoastIt is eaten during the British style roast dinner and is a rich vegetarian dish consisting of nuts, grains, vegetable oils, broth and butter.