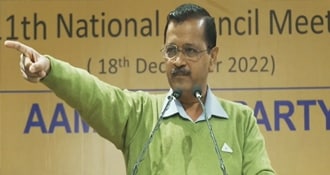 New Delhi: The Aam Aadmi Party will start its ‘BJP’s 15 years Vs AAP’s 3 weeks’ campaign on Saturday to showcase the work done by its councillors in the last 20 days, AAP leader Durgesh Pathak said.He also said the AAP will share a report card on the work done by its councillors in the last 20 days.On December 7, the AAP won the MCD polls with 134 seats, ending the 15-year rule of the BJP in the municipal corporation and reducing the Congress to just nine seats in a house of 250.Though the oath-taking ceremony for new councillors is yet to be held, Pathak said those from the AAP have started working in their wards. “Huge changes” can be seen across the city in just 20 days after the Municipal Corporation of Delhi (MCD) results, he claimed.”It has been just three weeks and our councillors have started working in their respective wards. We will start a campaign called ’15 years Vs 3 weeks’ and we will update everyone about the work done by our councillors in the last 20 days,” he said on Friday.He further stated that after the results of MCD were announced, drains have been cleared, parks cleaned and the sanitation workers are being treated with respect by the AAP councillors.”People must have noticed this on their social media that Delhi looks changed in just 20 days. Our councillors have been working hard for the betterment of the city,” Pathak said.(Except for the headline, this story has not been edited by NDTV staff and is published from a syndicated feed.)Featured Video Of The DayPM Modi Performs Last Rites Of His Mother In Gandhinagar