10 of the Most Ingenious Deception Tactics Used in War – Listverse

In war, strategy is everything. A single well-executed maneuver can be the difference between victory and defeat. This was certainly the case with the Trojan Horse, a brilliant tactical move that allowed the Greeks to take control of Troy. But, while the story of the Trojan horse may be a thing of fiction, the use of wacky but clever ploys in war is not.

Here is a list of some of the most clever deceptive tactics that have been used in war throughout history.

Paris is a city rich with history that stretches back centuries. But during World War I, German bomber planes flying by night were an imminent threat to the iconic landmarks of the French capital. The French came up with a pretty ingenious plan to build a fake Paris replica out of wood and canvas, complete with lights, so that it would fool the German pilots at night.

The decoy city would be located just outside the real Paris, and it would be designed to confuse and lure the German pilots away from their true target. Fortunately, the war ended shortly after construction began, so the plan was never fully realized. The story of the fake Paris is a reminder of the lengths that people will go to in times of war. It is also a testament to the power of human ingenuity and creativity, even in the face of adversity.[1]

9 German City Does Not Go Dark to Avoid Bombing

Like France, German cities were also terrorized by nighttime air raids. In World War II, one German city called Konstanz, which sits near the border of Switzerland, was able to elude bombardment by refusing to turn out the lights after dark. In order to protect itself from nighttime air raids, German cities were forbidden from using any lights. Street lamps and buildings went dark, and citizens were not allowed to use candles and had to cover their windows with curtains or black paint.

On the other hand, their Swiss neighbors—who were neutral in WWII and thus not targeted by the Allies—remained illuminated at night. By keeping their lights on, Konstanz was able to fool the Allied forces into thinking they were part of Switzerland and managed to make it through the war mostly unscathed.[2]

If you think deception is an art, then the U.S. Army took it to new heights during World War II. They went so far as to gather a team of artists and audio experts to create an elaborate phantom military unit of inflatable tanks and phony sound effects and radio transmissions to fool the Nazis.

The 23rd Headquarters Special Troops, also known as the “Ghost Army,” was made up of around 1,100 soldiers who were tasked with creating lifelike dummy tanks, trucks, and artillery. They also played recorded sounds of battle to make it seem like there were more troops than there actually were. The bluff created a distraction that tied up enemy resources and preoccupied them with a military presence that wasn’t really there while the real Army maneuvered elsewhere.[3]

7 Foiled Camisade During the War of 1812

During the war of 1812, one town on the coast of Maryland managed to fool the British during a nighttime siege. St. Michaels was a shipbuilding town targeted by British forces approaching via the Miles River. When an attack by the British became imminent, the townspeople decided to take action.

They placed lanterns in the treetops around the town, making it appear as though the town was at a higher elevation than it actually was. When the British rowed onto shore in the night, they were met with cannon fire by the Americans. This drove them back to their ships, from which they fired upon the town. Because they aimed at the lights in the trees they thought were windows and buildings, they ultimately shot over the town and failed to hit anything.[4]

6 Army Builds a Fake Base to Fool Saddam Hussein 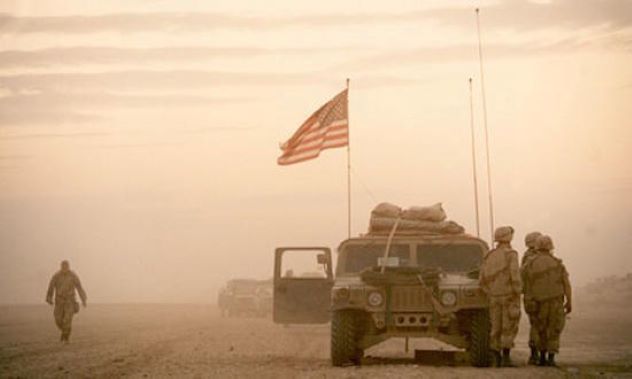 The Gulf War was fought in the early 1990s as a coalition of forces from more than 30 countries sought to liberate Kuwait from Iraqi occupation. Before the first bombs fell on Baghdad in 1991, the U.S. military was engaged in a battle of wits with Saddam Hussein. The Iraqi dictator had invaded Kuwait and was dug in for a long occupation. In order to drive him out, the U.S.-led coalition needed to mount a surprise attack. But how could they keep Saddam guessing about their plans?

The answer was Forward Operating Base Weasel, a secret military base set up for the purpose of deceiving the Iraqi leader. By sending out false radio signals, including recorded Egyptian radio traffic about the Americans and planting bogus intelligence, the coalition was able to convince Saddam that the main attack would come from the south when in reality, it would be coming from the west. It was a daring plan, and it worked like a charm. Thanks to the brave men and women at Forward Operating Base Weasel, Saddam was caught off guard when the real attack came, and his forces were quickly routed.[5]

Douglas Brent Hegdahl III was only twenty years old when he was taken captive by the North Vietnamese during the Vietnam War. A Navy seaman, Hegdahl had been on a ship in the Gulf of Tonkin when he fell overboard and was picked up by a North Vietnamese fishing boat. Hegdahl was immediately taken prisoner and spent the next two years in captivity.

During that time, he developed a deep understanding of the Vietnamese language and culture. However, he was able to fool his captors into thinking he was stupid and harmless. He exaggerated his country accent and expressed a fascination with communism. As a result, he was treated relatively well and was dubbed “the incredibly stupid one.” He was allowed to roam the POW camp freely and would secretly sabotage the Vietnamese by doing things like putting dirt in gas tanks to disable them. He was eventually released as part of a prisoner exchange. After returning to the United States, Hegdahl was tapped for his knowledge about the Vietnamese as part of negotiations for ending the war.[6]

A trap is only as good as its bait, and when it comes to luring in his enemies, Hannibal of Barca is a master angler. In 216 BC, the Carthaginian commander found himself and his army cornered in a valley in Campania. Unfortunately, his army was situated in a valley with Romans guarding the only way out—a mountain pass.

Seeing no other way to escape, Hannibal took a herd of cattle and stampeded them toward the pass with flaming torches on their horns. The guards, thinking the cattle were Hannibal’s soldiers, rushed to confront them and his army safely slipped away under cover of night. It’s a story that has gone down in history as one of the most clever military maneuvers, and it’s a testament to Hannibal’s resourcefulness as a leader.[7]

In 1943, British intelligence came up with an outlandish plan to deceive the Nazis that sounds straight out of a spy flick. The plan, codenamed Operation Mincemeat, involved planting false documents on the body of a dead man and releasing the body into the sea off the coast of Spain. The corpse was that of a homeless man but was given a fake identity to pass off as a dead British officer.

The hope was that the Germans would learn of the corpse and believe the contents of the phony documents attached to it. The plan was successful, and the Germans were led to believe that the Allies were going to invade Greece and Sardinia rather than Sicily. As a result, they diverted troops to these areas, which helped ensure the success of the Allied invasion of Sicily. Operation Mincemeat is now considered one of the most successful deceptions in military history.[8]

In World War I, the British and the Ottomans were embroiled in a slow, drawn-out battle in the trenches. Eventually, the British learned that the Ottomans had run out of cigarettes, at which point they sent packs to the enemy. However, the action was far from altruistic as they also attached propaganda in an attempt to demoralize and taunt their adversaries.

The Ottomans willingly took the smokes but defiantly discarded the propaganda, showing no intention to surrender. The British prepared to raid the enemy but, before doing so, sent over more cigarettes, this time laced with opium. By the time the British launched their attack, it was an easy victory as their enemy was too strung out to put up much of a fight.[9]

1 Cats on the Battlefield

Back in 525 BC, a war was waged between the Persians and Egyptians. In the battle of Pelusium, the battle-tested Persian leader Cambyses II was able to get the best of Egypt’s young inexperienced pharoah, Psametik III. In Egyptian culture, cats and other animals were held as sacred. Cambyses II knew this, and according to ancient accounts, he had his army show up to battle with images of cats painted on their shields.

Additionally, Persian forces released a large number of cats, dogs, and sheep onto the frontlines. The Egyptians were fearful of causing harm to these animals and were so alarmed at the sight of Persian soldiers throwing cats at them that they fled in panic. As a result, many Egyptians were slain in the process, and the Persians were able to take control of Egypt with relative ease.[10]

How to Get a Wordle Hint Without Spoiling the Whole Thing

How to Win ‘Sober October’ (Even If You Drink a Little)

How to Cook Ribs in Your Oven Without Special Equipment

How to Get a Wordle Hint Without Spoiling the Whole Thing

How to Win ‘Sober October’ (Even If You Drink a Little)

How to Cook Ribs in Your Oven Without Special Equipment