Thanks to human conflict, there is no shortage of forts, bases, and shelters. Those that are abandoned have a certain attraction, a sense of mystery that calls to urban explorers and researchers alike. This list looks at deserted places with interesting backgrounds or current situations. From the station in Antarctica that scientists keep abandoning to the bunker mania that almost ruined a country, here is the best collection of strange stories!

10 From Conflict Lookouts to Bat Hotels

In 1994, Jordan and Israel put aside their differences and signed a peace treaty. As a result, army bunkers along the Jordan River were vacated, and they’ve been empty ever since. Well, empty of humans anyway. Over time, 12 indigenous species of bats moved into the ghost bunkers. From an environmental point of view, this was a good move on the animals’ part. Five of the species were listed as either endangered or critically threatened. The bunkers became a much-needed sanctuary for them.

No interference from people and living in a closed military zone stretching 60 miles (96 kilometers) allowed the bats to thrive. Their numbers, now in the thousands, help the environment because their appetite for bugs reduces the need for pesticides in the surrounding areas. Great for the environment, but definitely not someplace I want to add to my “must-visit” list.[1]

9 A Unique Gallery of Ships 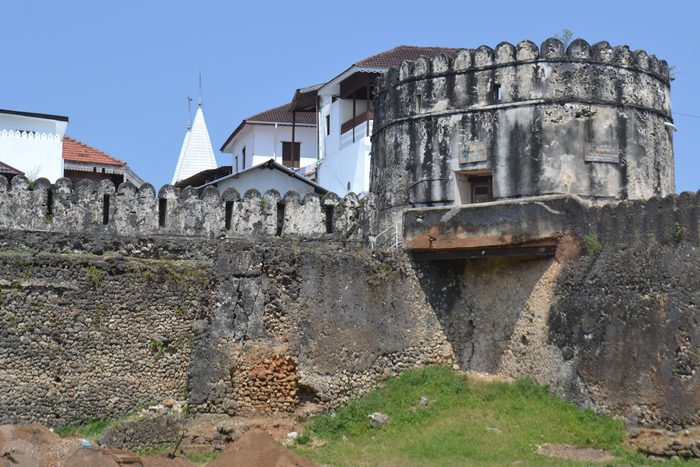 The Old Fort in Zanzibar has long since been retired as an active fort. These days, the castle-like building is a cultural center. But recently, carved graffiti of ships on the walls came to light. Likely created during the late nineteenth century, researchers believe that the pictures were inspired by boredom. In other words, the “artists” were guards on duty who had time on their hands and a clear view of the ships that docked outside the fort.

This sounds mundane. But the engravings provide a rare snapshot of which vessels were a part of the trans-oceanic trade network that used the western Indian Ocean during this time.

If the soldiers truly did doodle ships they saw in real life, then a rich variety lowered their anchors near the Old Fort. These included a rare ship called an East African mtepe (a vessel that was sewn together instead of using nails), European-style frigates, and dhows (settee-rigged deep-sea ships). Some carvings also had transom sterns which hinted at ships like the kotia, ghanja, baghla, and more.[2]

In the west of Poland sits a dismantled nuclear base. Originally built by the Soviets, the design includes two underground bunkers. In recent times, bats decided to turn the bunkers into overwintering caves, and this gave bat fans the opportunity to study them.

In 2013, someone noticed the ants. A huge number of wood ants were trapped inside one of the bunkers, and the prognosis for them was slim. They had no queen, food, light, heat, or way to escape. And yet, as the years passed, their numbers never dwindled.

The mystery was solved when researchers looked at clusters of dead ants and discovered that nearly 90% of them had been nibbled on by their nestmates. The colony also had a nest above the bunker, and some ants kept falling through a hole (replenishing their numbers). They survived by eating their dead. The scientists were kind enough to install a ramp leading back to the nest, and after years of being trapped, almost all the ants quickly abandoned the bunker.[3]

7 The Location of Sapling Fort

During the early nineteenth century, the Tlingit people resisted Russia’s goal of establishing a fur trading post in Alaska. They built the “Sapling Fort,” also known as Shís’gi Noow, which was the final barrier against advancing Russian soldiers. In 1804, the Tlingit engaged in a battle at the fort, but five days later, they were defeated.

Despite their commendable last stand, the location of Sapling Fort slowly disappeared from local memory. In 2021, researchers decided to hunt for the historical fort by using radar scans.

The idea was to look for underground ruins and compare the shape of their perimeter with the known design of Sapling Fort. The project became one of the biggest radar surveys in Alaska. After buzzing 42 acres (17 hectares), they found subsurface signatures that matched the fort’s design as well as details given in both Russian and Tlingit accounts.

So, where was it? After a century of being missing, Sapling Fort was found in Sitka National Historical Park near the mouth of the Kasda Heen river.[4]

6 A Ghost Station in Antarctica

The Halley VI Research Station sits on the Brunt Ice Shelf in Antarctica. It’s been gathering Earth and space weather information since the 1950s. For decades, scientists enjoyed the fully equipped living quarters that were designed to keep humans comfy all year round. But a couple of years ago, the shelf started to crack. Fearing for their safety, the researchers abandoned Halley VI.

But this research station is fascinating for two reasons. First, it’s constantly being abandoned. Every winter, when living on a cracking shelf becomes too risky, the scientists leave. However, they were losing a lot of data this way and eventually rigged Halley VI so that it now runs itself. In the long months when it’s basically a ghost base, the station continues to gather important weather and climate measurements—with no help from humans.[5]

It’s hard to imagine that the building of bunkers can bring a country to its knees. But that is what happened to Albania. From 1941 to 1985, the country was ruled by a dictator named Enver Hoxha, who was convinced that Yugoslavia, Greece, and even his Soviet allies wanted to invade Albania. While the chances of this were zero, Hoxha was so paranoid that he built about 750,000 bunkers all over the country. Their construction practically enslaved his people and drained the country’s coffers.

Most of the concrete fortresses were domed and stocky. This earned them the local nickname of “mushrooms.” These days, hundreds of them still exist all over Albania and range from large underground shelters to two-person igloos. People now use these relics for more practical matters like animal sheds, shops, changing rooms, art galleries, or discreet meeting places for couples.[6]

4 Remains of a Fake Airfield

During World War II, battles weren’t always won with brute force. Sometimes, all you needed was a clever trick. Late in 1942, the decision was made to create a fake airport to give enemy pilots the impression of a strong military presence in Virginia. However, the base also served as a decoy during air raids to spare the nearby city of Richmond. At night, when Richmond went dark, the airfield lit up to draw German planes away from the city (and the real airfield).

The dummy airfield was created by the 936th Camouflage Battalion, who made fake hangars, vehicles, aircraft, and taxiways. After the war, the site was used for bombing practice, and later, there was a failed attempt to turn the site into a psychiatric facility. These days, when viewed from the air, some ruins of the now-abandoned airport still peek through the trees. These include a water tower and roads leading to nowhere.[7]

In 2004, Robert Muckle received a tip about an interesting site in the North Shore mountains of British Columbia. The archaeologist expected to walk into a historic logging camp. But upon arrival, the truth emerged. Once upon a time, deep in the Canadian forest, there was a thriving Japanese village.

This surprising discovery consisted of 14 houses, a water reservoir, a bathhouse, a garden, and a shrine. Muckle suspects that the site started out as a logging camp but then turned into a secret village as more Japanese sought refuge from the racism of the day, made worse by the Second World War when Japan attacked Pearl Harbor and Hong Kong, where many Canadian soldiers were killed.

The base was abruptly abandoned. Muckle’s theory is a sad one. During this war, up to 90% of Japanese Canadians were forcibly relocated. This policy separated families because the men were forced to work on road gangs, and women and children were dropped off in ghost towns in the wilderness. Muckle suspects that the secret village was discovered and that the inhabitants were packed off to different camps.[8]

During World War II, the German military occupied Bordeaux in France. They established a fleet of submarines in the area that needed a safe place to dock while being repaired. The result? A massive bunker that was designed to withstand the worst aerial attacks. The domed structure spread over 130,000 square feet (over 12,000 square meters) and consumed enough reinforced concrete to fill 240 Olympic swimming pools today.

The submarine base was abandoned two years after it was built. Not because it didn’t work—the bunker withstood several air attacks with almost no damage. However, when German forces withdrew from Bordeaux in 1944, they couldn’t exactly take the massive building along.

The base remained empty for decades. Then, it caught the eye of creative minds who turned the cavernous interior into the world’s biggest digital art gallery. These days, visitors can walk through different sections of the bunker and enjoy floor-to-ceiling art being digitally projected against the walls.[9]

In 1991, a Fort Wayne resident was totally fed up. Tim Howey owned a home with a curious feature, one that kept luring strangers to his yard. The crowd-pleaser was an old bunker. Purchased by the previous owners of the home, the Andersons, the shelter had cost $1,800 and claimed to protect people against nuclear fallout. The Andersons lived during the Cold War when nuclear threats were always around the corner. So, in 1955, they had the bunker installed in their front lawn at a depth of 15 feet (4.5 meters).

By the time Tim Howey owned the property, the steel structure had risen to the surface and into public view. When the attention became too much, he offered the artifact to the National Museum of American History, which jumped at the chance to own the artifact. They exhumed the bunker and added it to their collection. Visitors were now free to gawk at the cramped quarters that included a chemical toilet, four beds, and a hand-cranked pump that could be used to pull fresh air into the shelter.[10]

Jana earns her beans as a freelance writer and author. She wrote one book on a dare and hundreds of articles. Jana loves hunting down bizarre facts of science, nature and the human mind.